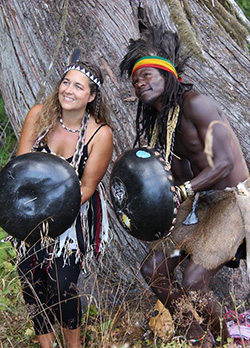 AMY and Tafadzwa Matamba, the couple behind Canada-based Mbira Spirit, come from different worlds but they combine to offer a powerful and engaging sound.
Playing African, reggae, folk, spiritual and gospel music this musical couple, who make their home in Mill Bay, have been busily spreading the good word about bridging communities and cultures with a host of appearances around Vancouver Island in British Columbia.
They are now on the cusp of releasing their first CD, entitled One World, One Love, which includes a break-out hit, Ferry Me Home, a tribute to Vancouver Island. It was recorded at a sold-out concert on New Year’s Day.
The song is already being played on CBC Radio, on Zimbabwean radio, and many local stations on Vancouver Island and the Gulf Islands as well as in Vancouver.
“The music and song that you create as a loving couple is truly inspirational and soul lifting indeed.
“You are creating something unique and far reaching as no one else in these parts are making such wonderful, moving and magical moments with music,” raves DJ Skyy Powers, Vancouver Coop Radio 100.5FM.
Because Mbira Spirit wants to make a positive change with their music, all proceeds from their music and performances will go towards two cultural arts centres, one on the Island and the other in Magunje, Zimbabwe.
“There is a need to provide an enriching environment that allows all to remember and celebrate their shared experiences, traditions, identities, struggles and aspirations,”﻿ said the couple.
“SAY IT” – MBIRA SPIRIT