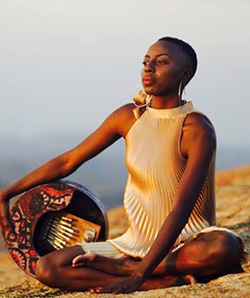 ZIMBABWE’S mbira sensation, Hope Masike is this year’s main attraction for the third edition of the South African version of the Zimbabwe Achievers Awards (ZAA), taking place at the renowned Maslow Hotel in Sandton, Johannesburg on the 10th of December.
Masike will headline the event alongside a number of prolific artists. The announcement comes weeks after the organising committee revealed Carl Joshua Ncube as the event host.
Included in the growing line-up are Entertainment and lifestyle writer Tafadzwa Zimoyo and multi-talented actress Evangelista Mwatse who will this year host the red carpet segment to be streamed live via zimachievers.com.
Speaking about the red carpet gala, the multi-talented vocalist promised to bring vivacity to the black-tie event.
“I am thrilled to be performing at the third edition of ZAA South Africa. I am ready, and cannot wait to share my new material, as well as some classic throwbacks,” she said.
Masike is one of the most sensational musicians to emerge out of Zimbabwe in the last decade. With two albums to her name and several collaborations and tours, she is well known for her veracity and the ability to blend different music styles.
Her music is a hybrid of Mbira, Jazz and AfroPop. Though commonly known for her voice and mbira-playing, Hope also plays several African percussion instruments.

Hope’s sultry voice, awe-inspiring, eclectic and highly-charged performances have earned her critical acclaim and fans worldwide. She has also shared the stage, and collaborated with stars like Salif Keita and Norwegian transcultural outfit Monoswezi.
Masike has also earned several NAMA accolades including Outstanding Female Musician and Best Music video in 2013 and 2015 respectively. She also received a KORA award nomination this year for her song ‘Huyai Tinamate’. Hope is currently working on her third album due for release mid-2017.
The organisers have said plans for the event are almost in place and have also announced a further three sponsors – Impala Car, Fastjet and Hamilton Insurance. They join Steward bank, Mukuru.com and FoodWorld.
ZAA Organising Director Lawrence Dube expressed his appreciation to all the sponsors and said that the team were geared for the event on the 10th of December.Advertisement

“We are pleased to welcome on board three of the most respected businesses who join our main sponsors Steward bank, Mukuru.com and FoodWorld. We thank them for partnering with us and bringing the annual event to life,” Dube said.
Dube also encouraged the public to continue voting as voting lines close on Monday 5th December.
The panel thereafter will verify the results, deliberate and emerge with the winners list for this year.
Tickets are still available and can be purchased at www.zimachievers.com/sa