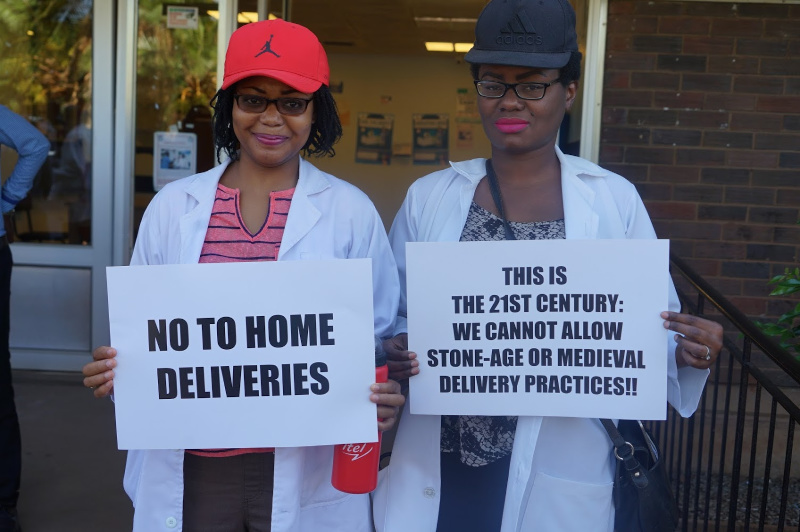 ZIMBABWE hospital doctors have slammed government for allegedly taking the country’s health care system backwards through celebrating the delivery of over a hundred babies under unsafe backyard conditions by a less equipped Harare midwife during their prolonged strike.

Mbuya Gwena – real name Esther Zinyoro – who lives in Harare’s poor Mbare suburb, was recently hailed as a heroine after she took it upon herself to assist over a hundred expecting mothers to deliver in her home.

Her efforts, although heroic, spotlighted on glaring government omissions within the sector.

On Wednesday, hundreds of senior and junior doctors took the onus to remind government of its obligations through a 4km march from Harare’s Parirenyatwa Hospital to parliament building to present a petition.

In their petition, senior public hospital doctors said by lauding traditional midwifery, government was derailing the health sector instead of developing it.

“This plan and the recent endorsement and sanctioning by cabinet of traditional midwife supervised deliveries in home settings in the capital Harare, is a plan to pull Zimbabwe’s healthcare delivery system’s development backwards by over 50 years.”

While government described Mbuya Gwena’s efforts as ‘heroic’, medical professionals voiced their concern over the unsafe and unhygienic methods which could lead to loss of life and dangerous infections to both the mother and new-born babies.

Images of expectant mothers at the Mbare home crowded in small rooms and lying on plastic mats circulating on social media evoked both awe and distaste among Zimbabweans.