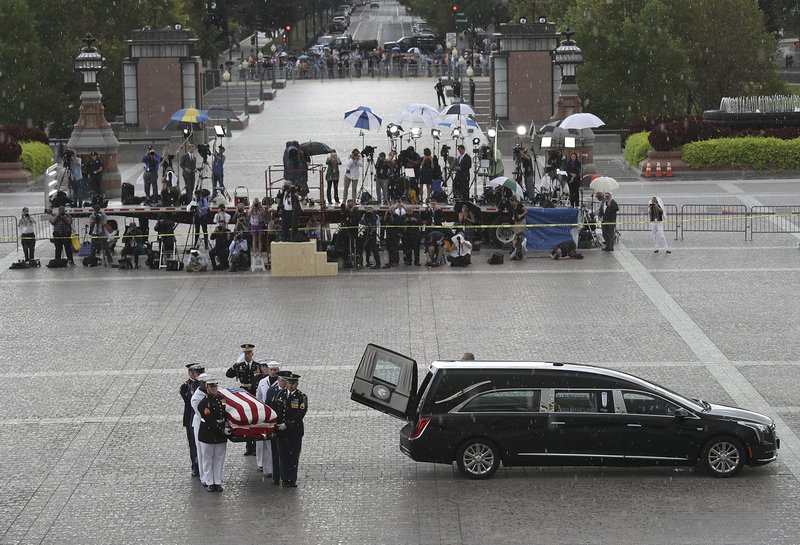 Hundreds of miles away in Washington, D.C., honor guards stood ramrod straight through silent pomp and circumstance while politicians shared stories of battle and friendship with Arizona Sen. and former Republican presidential candidate John McCain, who lay in state inside the Capitol Rotunda. Mourners stood quietly in line, their sadness draping the air like a cloak, as they waited to file past McCain’s flag-draped casket.

The contrast between the two events was striking, coming at a time when the country is experiencing extreme divisions on politics and race.

Franklin’s funeral was unapologetically black: ringing oratory from a rainbow of celebrities, friends, family members and preachers’ amens and hallelujahs caroming off the rafters of Detroit’s Greater Grace Temple. Black entertainment got major nods, including a Wakanda “Black Panther” salute from Rep. Maxine Waters, who often hurls barbs back and forth with President Donald Trump, a target of scorn from several orators at her funeral.

The McCain tribute was a more staid, less diverse affair, deeply rooted in military and political traditions representing his time as a naval aviator, a prisoner of war, longtime politician and presidential candidate. His journey included military escorts and sorrowful tributes from political colleagues with statues of Washington and Eisenhower in the backdrop.

Completely different tributes, but fitting ones for the worlds that Franklin and McCain represented.

“We laid to rest two icons today, one a politician and the other an entertainer, and their funerals were so different because of how they lived their lives,” said Tuawana Pridgen, a licensed mortician and funeral home owner in Lanham, Maryland, who watched both services.

Franklin was remembered for her incomparable voice that spoke to a generation of love and power, McCain for his service to his country that included as surviving torture in Vietnam and presidential election losses, a fierce competitor who also knew how to win — and lose — honorably.

“It is only right that today, near the end of his long journey, John lies here, in this great hall, under the mighty dome, like other American heroes before him,” Senate Majority Leader Mitch McConnell said. “We thank God for giving this country John McCain.”

McCain, 81, was military royalty, an heir to four-star Navy admirals, a naval aviator who suffered as a prisoner of war in Vietnam. His funeral service, with former presidents Barack Obama and George W. Bush among the speakers, was taking place Saturday at the National Cathedral, followed by burial with full honors at the U.S. Naval Academy in nearby Annapolis, Maryland.

Franklin, 76, was the Queen of Soul, the daughter of a Baptist preacher with a voice that transcended and defined genres, a down-home diva who never strayed from her roots in the black church, and Detroit.

Former President Bill Clinton drew laughs when he told the crowd he wanted to see which outfit Franklin was wearing in her casket — her fourth wardrobe change of the week. Tyler Perry noted that when she sang at the Kennedy Center she brought an audience of politicians to their feet with her voice and then “all had to bow down to the Queen of Soul.”

Obama, who was not there in person, sent a letter of condolence and got an ovation nonetheless when Rev. Al Sharpton read his letter to the crowd.

“Aretha’s work reflected the very best of the American story, in all of its hope and heart, its boldness and its unmistakable beauty,” Obama wrote.

Politics also reared its head as Sharpton praised Franklin as a gospel and civil rights icon. He condemned President Donald Trump’s comment that Franklin once worked for him, saying, “She performed for you. … She only took orders from God.”

Bridging the two worlds was Sen. Debbie Stabenow, D-Mich., who spoke at Franklin’s funeral on Friday and said she would attend McCain’s on Saturday.

“We are laying to rest two iconic figures,” Stabenow said. “Though different, (they) represent who we are as America, our true American spirit in music and culture and love of the country.”