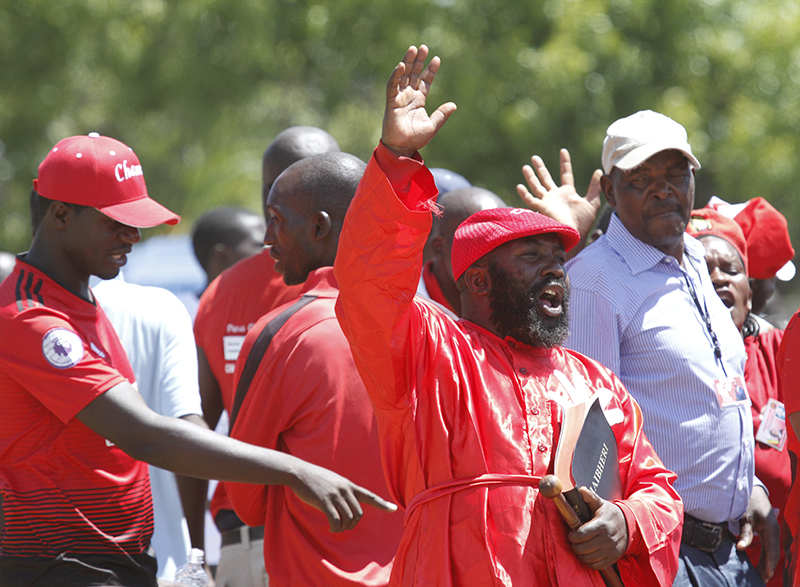 THE MDC 20th anniversary celebrations began Saturday with a conspicuous deployment of truckloads of anti-riot police in the Harare city centre.

Some of the trucks were parked outside the main opposition’s national headquarters in the CBD.

Police closed off some roads in Mbare where an estimated 20 000 party faithful converged to celebrate 20 years since party formation.

Chamisa arrived some four hours after the first batch of supporters got into the iconic stadium, in which the MDC was launched back in 1999. The same stadium is where the Union Jack was lowered back in 1980 to mark Zimbabwe’s independence.

The MDC leader’s convoy made its way into the stadium at 1.10pm.

He stepped out of his vehicle right at the gate and made his way around the pitch waving at his supporters, most of who were displaying some placards bearing his name.

Mliswa braved some heckling by MDC supporters as he went through his solidarity speech.

Efforts to calm the situation by party organising secretary Amos Chibaya did not bear any fruit.

In his solidarity speech, ZCTU president Peter Mutasa chronicled the formation of the MDC in 1999 and reaffirmed the main labour union’s continued support for the opposition party.

In his keynote address, Chamisa appeared exonerating MDC run councils that have come under fire for mishandling the affairs of local authorities under their control with Harare standing out as the worst.

Chamisa cited government meddling in operations of the councils as the main reason they were failing to deliver.

He relived the terror his party has gone through under then Mugabe’s brutal regime.

Coincidentally, as MDC celebrated its anniversary, Mugabe was being buried in his rural Zvimba village at a low-key event attended by a few hundreds of friends, relatives and political allies.

Chamisa also promised siege against incumbent President Emmerson Mnangagwa, calling on disgruntled government workers to unite with the party in protesting the worsening economic situation until the Zanu PF leader’s exit from power.

Through to his acid-tongue, Chamisa took time to mock Mnangagwa’s recent address at the United Nations General Assembly in which the State leader was left addressing few delegates in a near empty auditorium.

Chamisa took amusement at Mnangagwa’s perceived discomfort with the English language, comparing the latter to Mugabe, who was undoubtedly a polished speech presenter.