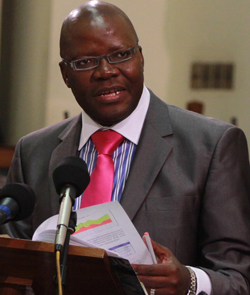 FORMER finance minister and MDC Alliance principal, Tendi Biti, says the alliance government is targeting at a $100 billion economy which will create mass employment.
Speaking at the MDC-Alliance launch in Bulawayo Saturday, Biti said with the support of the international community, the creation of a $100 billion economy will be achievable during the lifespan of the alliance.
“I can tell you that with the experience which we got from the inclusive government this team (MDC Alliance) will be able to grow our economy. Zimbabwe’s current GDP is 12 billion but if we grow our economy during the Alliance governance just at the rate of 7% per annum, it means that in less than 15 years we can build a $100 billion dollar economy,” said Biti.
The People’s Democratic Party leader said in order to achieve this target, the MDC-Alliance government will prioritise foreign direct investment attraction policies.
“Our team has good friends and countries that respect and trust us to allow their companies to come and invest in Zimbabwe. What is needed is to create employment by attracting foreign direct investment,” said Biti.
If elected into office, Biti said the new government would come up with a programme of action document.
“We must provide an answer to the question of unemployment. There are three generations of Zimbabweans who do not know what a payslip looks like. The truth of the matter is that our people are suffering,” he said Biti.
The PDP president also bemoaned the deterioration of social services and infrastructure in the country.
“It is sad that our people are still using bush toilets. It is a pity that countries like Rwanda are much far ahead of us in terms infrastructure development yet their president Paul Kagame came into office not so along ago. In Rwanda, you can hardly see a thatched house,” added Biti.
Advertisement