MDC Alliance legislator for Harare West, Joanna Mamombe and two party youth leaders were arrested Wednesday for leading an anti-government protest over poor handling of the Covid-19 outbreak and hunger by authorities.

Mamombe was arrested together with Cecilia Chimbiri and Netsai Marova at a roadblock near the National Sports Stadium in Harare.

The demonstration, the first by the main opposition party since government declared a national lockdown against the spread of Covid-19, was held in Warren Park, a suburb that is some five kilometres west of the city centre.

Harare’s CBD, a traditional venue for most MDC protests, is inaccessible for many people who do not have exemption to leave their homes during the lockdown period.

Earlier reporters indicated they were detained at Harare Central Police Station by the CID Law and Order division.

“The trio are currently illegally held in custody at Harare Central Police Station.

“As usual, the police are still to place charges on the trio. It is clear that the corrupt, illegitimate and failed Emmerson Mnangagwa regime has engaged the panic gear hence these unjustified arrests,” said Chuma.

He vowed the MDC Alliance youth wing will not sit idle while Mnangagwa and his government harassed the opposition.

“As an Assembly, we are not going to be intimidated in our resolve to pursue the National Democratic Agenda.

“We declare and demand for the unconditional release of our leaders. Either the rogue regime release our leaders or face retribution from angry and hungry masses. Enough is enough!” warned Chuma.

Meanwhile, the MDC reported Wednesday the whereabouts of the three party activists were not known. 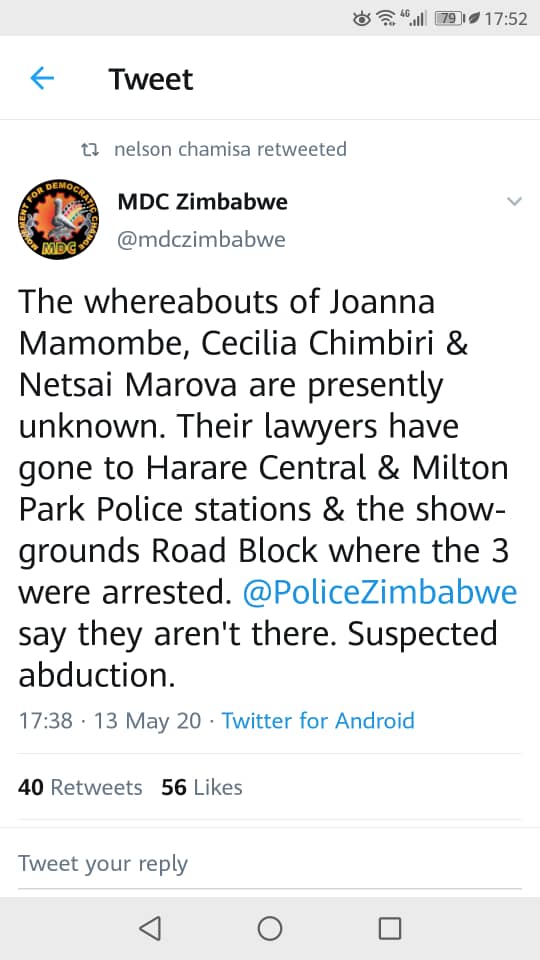