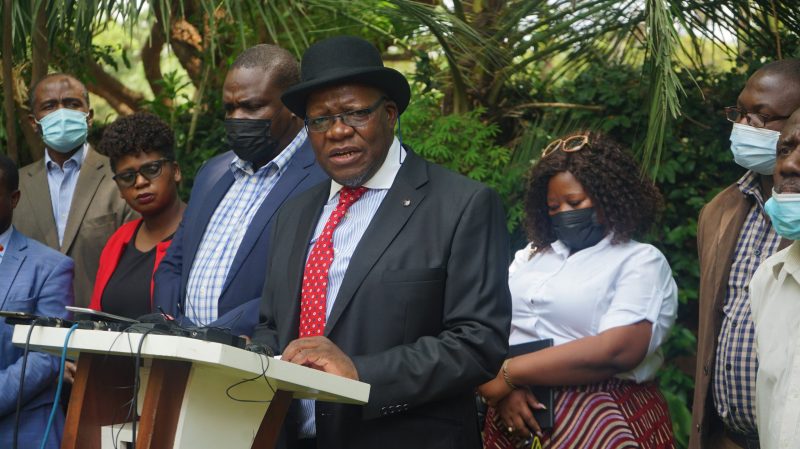 MDC Alliance President Nelson Chamisa remains defiant and will continue with his national “Meet The People Tour” despite the recent attempts on his life by suspected Zanu PF activists in Masvingo and Manicaland provinces.

Addressing the media in Harare Wednesday, a day after the opposition party claimed there was an assassination attempt on Chamisa in Zimunya, Mutare, MDC Alliance Vice President Tendai Biti, dismissed claims the opposition was dramatising assassination attempts as a way of seeking the attention of United Nations (UN) special envoy Alena Douhan who is currently in Zimbabwe.

Douhan is on a 10-day fact-finding mission to assess the impact of Western-imposed sanctions on Zimbabwe some 20 years.

However, Biti said the opposition took exception, at they were dramatising there was impunity, violence, and disregard of the rule of law by the Zanu PF government.

“We take exception to the suggestion that we are creating drama, suppose president Chamisa had gone to Masvingo and Zanu PF had done nothing, it would not have been in the news,” Biti said.

“So, they are putting people and they are assaulting us and when they assault us, they cannot accuse us of drama,” Biti said.

Instead, Biti said the onslaught on Chamisa was unprecedented.

“There is a desperate attempt, a clear attempt that our party president does not meet Zimbabweans. We condemn in the strongest terms the actions by Zanu PF. We are seriously concerned that the attacks on, our president are consistent we have seen on our party since the 30th March 2020 when the Supreme Court judgment was handed down.”

Biti said since that Supreme Court ruling which said Chamisa was not the legitimate leader of the MDC-T, there had been a vicious attack on the senior party leader, the recall of MDC Alliance MPs and councillors from office.

“So, we have seen the de facto banning of the MDC Alliance under the guise of Covid regulations, we are not allowed to gather, yet Zanu PF is moving around. Zanu PF is organising internal activities.

“If President Chamisa is allowed to have a rally anywhere, over 200 000 people will attend. Even goats and snakes will attend.

However, Biti told journalists the MDC Alliance would “not fold hands and give Zanu PF a blank cheque to insult and assault the people of Zimbabwe.”

“Our message remains very clear. We will remain defiant within the confines allowed by our Constitution. Our president will continue with his meetings across the length and breadth of the country because we can,t sit and fold our hands as the crisis in the country unfolds.

“We can’t give Zanu PF a blank cheque to insult and assault the people of Zimbabwe. The situation in Zimbabwe is burning.”

Biti also suggested there was a need to solve the tense political impasse between Chamisa and Mnangagwa while also calling for reforms before the 2023 elections.

Meanwhile, Biti said the MDC Alliance had made a report to the police over the assassination attempt on Chamisa, but the opposition had lost confidence in the justice delivery system in the country, which is now captured.