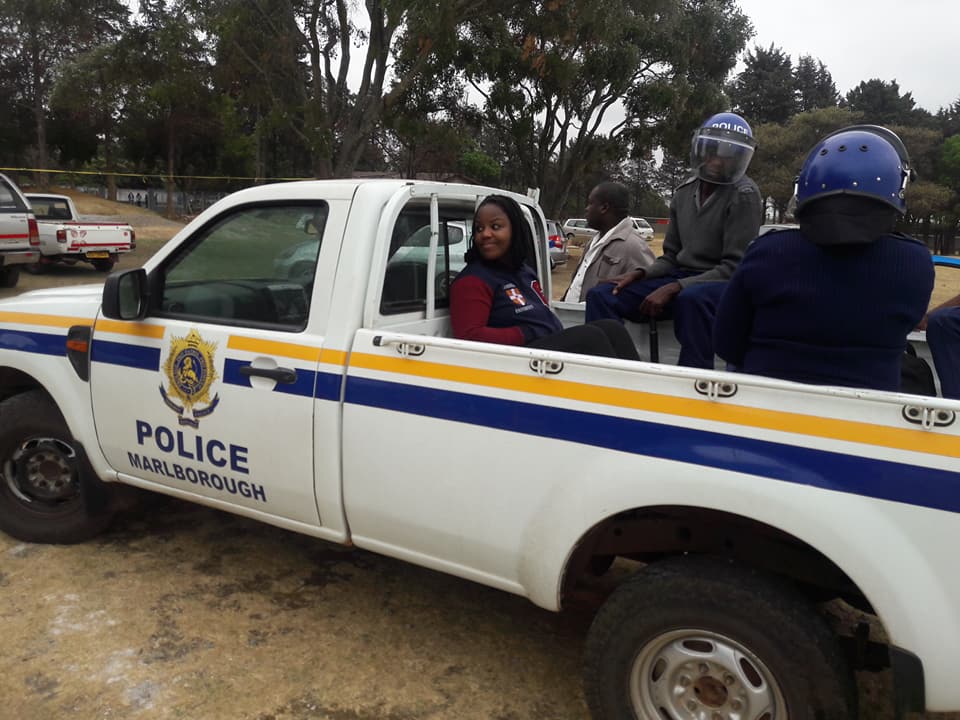 File image: Fadzai Mahere during a 2018 arrest over a sports tournament she organised to boost her election campaign
Spread This News

MDC Alliance spokesperson Fadzai Mahere was arrested recently and charged for allegedly communicating falsehoods in a matter involving a baby who was initially reported dead following a baton stick strike on an illegal commuter omnibus by a Harare police officer.

The politician would go on to spend seven says in state custody up until her release on bail.

In her own words, Mahere narrates her ordeal below:

“Ours must always be a story of hope. Of citizens who, knowing how ruthless & repressive this regime is, chose courage over inaction.”

As I was about to part ways with my phone to enter police detention, I sent Cee Musandu, my communications director, this message. She had asked me what she should say.

We have been the best of friends since 2016 when we joined #ThisFlag, a citizens’ movement that challenged the poverty, injustice and corruption prevailing under then President Robert Mugabe. The idea was to inspire an engaged citizenry that held the Government to account.

Many amazing and awful things had happened over the last four years but nothing had prepared us for the week that was to come.

It started on the Sunday morning. Two plainclothes police officers in an unmarked vehicle knocked on our gate and asked to see me. When asked what the issue was, they said it was in connection with tweets I had posted protesting police brutality. I had gone to the shops to buy some meds and supplies for the continued lockdown. They left.

As soon as I received the news, my heart sank. Courage does not mean you aren’t afraid. It means you act in spite of your fear. Hopewell Chin’ono and Job Sikhala had been arrested by the Police days earlier on similar charges. “Go seek refuge at a friend’s house,” my little brother suggested. I explained to him that you never run away from the Police. I quickly went back home, assuming that they’d come back. I telephoned David Drury, my old boss, mentor and trusted lawyer of choice. He advised me to stay put and wait for their return. I waited for what seemed like an eternity. Upon nightfall, Mr Drury said that because the police had not come back, we would have to attend upon Harare Central Police Station first thing in the morning.

At 9am on Monday morning, we were at the Police Station. We waited for an hour before being attended to. They would not immediately confirm or deny whether or why they wanted me pursuant to their visit the day before. Eventually, they confirmed that I was under arrest for my tweets. By 10.50am, I had signed my warned and cautioned statement. The docket was complete. We figured we would immediately go to court as we were in good time. To our surprise, the detective inspector came in with a detention order and told us to hurry up as we were “behind time.”

She had been ordered to hurry up and take me to the cells. Mr Drury appealed with them to take us to court to avoid unnecessary and potentially unlawful pre-trial detention. (This was the first of many appeals he would make to police, prison and court officers in the ensuing seven days.) The officer refused and offered no explanation or reasons to explain why I had to be jailed if the matter was ripe for court.

I was thrown into the all familiar lice-infested police cell with a drop toilet. The proverbial puddle of urine from last time and all the times before greeted me. Rather, it slapped my face. I was barefoot, having signed my shoes in upon entry as per procedure. There was no sanitizer, no facility to flush the loo, no sink and tap, no toilet paper and no sanitary bin. The blankets smelt of old urine. I shared the cell with six other ladies, most of whom were detained for breaching lockdown regulations. And there was Lisa, an alleged armed robber with whom I would make further contact in days to come. We talked, sighed and laughed then fell asleep on their concrete beds and covered ourselves in stained blankets that smelt of a mix of urine, human and dirt.

The next day, I was bundled into the back of a small police truck escorted by nine police officers who breathed on each other and breathed on me. Some wore masks and some wore them incorrectly.

As I walked up the prison truck in the rain, I slipped and fell. I quickly got back up because, since I was a child, my mother had taught me to get up immediately after a fall, dust myself up and move on. Mr Drury got into the truck to check if I was OK. He brought with him my bucket of supplies – assembled in haste by my siblings. It had all the good stuff – chocolate, candy, nuts, reading material and toiletries most of which I would soon learn were forbidden “inside”.

When we arrived, they told us to eat. Dinner was old sadza and watery beans. I politely declined – partly because I was in no state to eat but mostly because of the rule of caution that I had dished out to many a client when I was on the lawyering end of such an ordeal. The events of the previous two days had frozen my legal brain as I watched constitutional rights bludgeoned and the Supreme Law rendered a lifeless museum piece.

I resolved that the only way to make it through this ordeal was to embrace it, follow all orders including the illegal ones and then just make the most of it.

“Behave with beauty and dignity at all times,” is the best advice I received that week. We knelt before the prison wardens whom we called “Mbuya”. They took our details then stripped us of all clothing and our bras then handed us our green prison garb. I had a whole prison number – 38/21. My reading material (a YOU magazine and a Newsday newspaper) were taken away for “censoring.” I never got the newspaper back.

We were placed in an isolation cell with no window. Covid positive inmates were housed in the cell next to us. We shared a “toilet” outside lock up time. We were locked in our cell and a 5l container with the top cut off was placed in the corner of the room for us to relieve ourselves that night.

The next morning, we were moved to another section. It was a mix of remand prisoners and convicted inmates. Convicted inmates wore yellow. The concrete floor was our mattress. We had to make our beds out of old, dirty, torn, smelly blankets stamped “Parirenyatwa Hospital.”  Breakfast was watery porridge and a smidgen of peanut butter with some sugar which inmates had to eat with their fingers because spoons are forbidden.

We went round the room sharing the charges that had brought us in. Curious, I saved my story till last. Murder, murder, murder, murder, armed robbery, theft, armed robbery, lockdown, curfew, lockdown then “tweeting.” They laughed. So did I. One of the inmates in our section was Chipo* who, four years earlier, had axed a man to death in Gutu and started “eating his brain.” She would walk into our cell and pick an inmate up then place her down again. She would rummage through the bin for food, chase rats “to eat” and sometimes snatch people’s food. It was evident to an untrained medical eye that she had no mental capacity to commit a crime.

We were ordered to go and weed the garden. No distinction was drawn between those who were “in with labour”, those on remand and a person in my position who was challenging the very placement on remand. I chose happiness and took it as an opportunity to get some much-needed exercise. When the hoe was passed to me, they said “Fadzie, scrape don’t dig. This is weeding.”

I made many friends because humanity is wired towards positivity. People in distress tend to make the most of tough situations united by our basic human instincts that want dignity, freedom, community and progress. I helped many fill out their bail application forms and dished out legal advice on available defences to many who requested it. I encouraged those who had done bad things to live right as soon as they got out. Story after story made me reflect on my own personal circumstances and feel grateful for God’s many mercies.

Mr Drury, Andrea Dracos, Emma Drury, my fellow advocates from Chambers, Harrison Nkomo, Rose Hanzi and Tino from ZLHR all came to visit me. I lived for those visits. Sometimes, I’d stand lifeless at the window of my cell staring at the gate in anticipation that someone would show up.

Mr Drury showed up everyday – a lawyer of immense distinction, integrity and honour who had taught me the ABC’s of court litigation, legal drafting and client management as we fought several land and human rights cases over a decade ago when I was a junior lawyer at Gollop and Blank was now plying his trade on me. I was confused as to how it had got to this but at the same time, reassured that I was in extremely capable hands. I nearly shed a tear when he pledged his own title deeds as he moved my bail application. “Your worship, I know her and can vouch for her. I’m prepared to put my head on the block because I know she won’t abscond.”

“Please tell my mom to stop crying,” I repeatedly said to everyone who visited. My parents, brothers and sisters are gladiators. Family is life. I’m grateful for a powerful network of friends and people who cared enough to offer much-needed solidarity.

Every day at lock-up time, I sat at my window and watched the skyline change from blue to a beautiful golden-peachy hue. The quiet beauty of the setting sun descending below the horizon was a peaceful reminder that the whole thing would eventually end. At least I hoped. I had mentally prepared for this to go on for weeks.

After seven interminable nights of incarceration, the court granted bail. I stepped out of the prison truck and knelt before the prison wardens one last time, crying internal tears of joy that the sun had finally set on this ordeal. I also remain hopeful that one day, the sun will set on injustice and repression. Until then, I will always choose courage over inaction.

I will never stop imagining that Zimbabwe will one day be free.🇿🇼