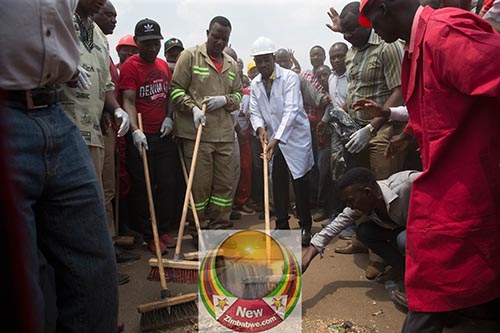 MDC has resolved to join President Emmerson Mnangagwa’s national clean-up day programme which the popular opposition has been boycotting since its inception last year.

The opposition chief said his party was also going to launch the so-called smart village concept in every rural area in the country for model housing.

“National building and nation development is a collective affair as MDC must do away with oppositional mindset. So, at all places MDC must show its footprints,” Chamisa said.

“We have not been participating in the national cleaning programme. Beginning this year, we are going to be part of government’s clean-up campaign. We are coming up with what is called Jekesa Zimbabwe.

“Every month, on the day that has been set aside for cleaning up places, we will now take part as MDC…we must have a nation building project.”

The opposition leader also told his followers the party will launch forays into Zanu PF’s stronghold rural areas to introduce a programme that will develop the countryside.

“We are launching in villages what we call the smart village concept, in every rural areas we want to do a model housing,” he said.

“We now have a programme called MDC in communities. We will be launching the smart cities policy document that will focus on how we govern differently detailing issues to the local authority’s service delivery, infrastructure, the vision of the city.

“We are also going to launch the smart villages policy that will entail our model smart homesteads, smart sources of energy, solar for each rural home, borehole per village infrastructure for villages, schools, bridges, etc.

“We are also going the emphasise on proper and true devolution, and a people-centred devolution Bill in line with the spirit in the constitution.”