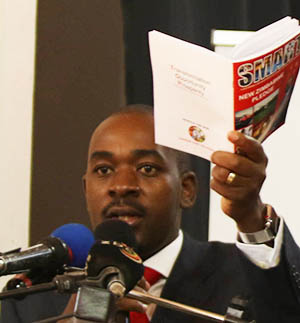 The opposition chief launched the document at Sapes Trust in Harare.

Chamisa said his party has crafted several election road-map documents which have been ignored by the ruling Zanu PF.

However, the MDC leader was convinced that PRICE was Zimbabwe’s answer to holding free and fair elections.

“This is a modest plan,” Chamisa said adding, “We want to make sure that we come together. We can’t outsource our problems. We are our own liberators and make sure that our country is given a new lease of life.”

He urged President Emmerson Mnangagwa, his main rival in the 2018 presidential election, to “have wisdom to listen to ideas”.

They are; the crisis of governance, comprehensive reforms, nation-building, national re-engagement and democracy.

“We are also mindful that this is not the first time we have produced this document as the MDC, we believe in being the alternative. We have always had documents put on tables so that we are able to have an osmosis of ideas.