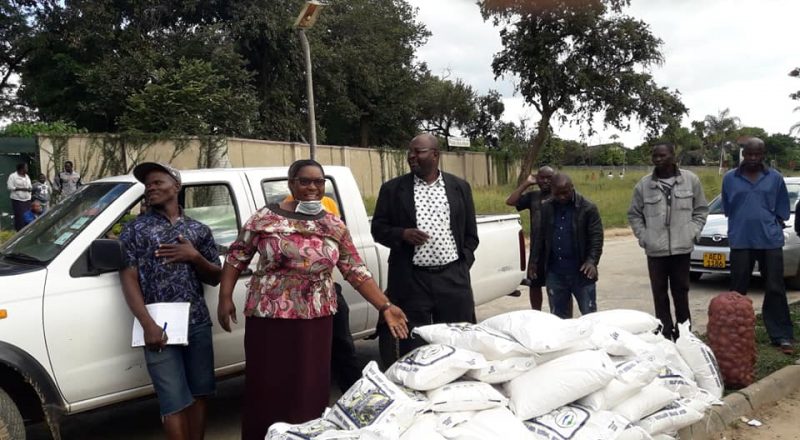 Regai Tsunga, in black, before his arrest for distributing mealie-meal
Spread This News

THE MDC MP for Mutasa South, Regai Tsunga was Tuesday arrested by police in Palmerstone, Mutare while donating maize-meal to vulnerable members in his constituency.

Tsunga confirmed the arrest, saying he was picked-up while giving desperate residents the staple food.

“It’s true that police picked me up at Palmerstone while I was implementing a constituency-based COVID-19 intervention activity centered on food security and nutrition,” said Tsunga.

He was taken to Mutare Central Police station where he paid a $500 fine for contravening Statutory Instrument 83 of 2020 which prohibits unnecessary movement during the national lockdown.

“Subsidised staple roller meal is now a scarce commodity. We have intervened to ensure the product reaches urban residents of Mutasa South Constituency without regard to divisive partisan politics,” Tsunga said.

Most families are going hungry as they are unable to buy mealie-meal, which is usually found on the black market selling for more than twice times the recommended retail price.

The MDC Manicaland province spokesperson, David Panganayi said they were not disturbed with overzealous police officers who were selectively applying the law against Tsunga and other MDC officials.

“The role of an MP is to assist vulnerable members to access basic nutrition such as meal-meal in times of need. This is the time we are expected to work together and set aside our political differences and be complementary to each other’s efforts,” he said.

“She was not harmed or disturbed by the same law that was used against Honourable Tsunga and all opposition officials. We wonder whether this illegitimate government will ever be transparent. Genuine beneficiaries are being sidelined and we wonder why our MPs are being harassed for assisting the vulnerable.”