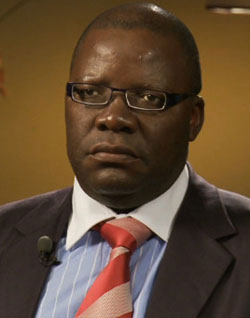 THE MDC Renewal Team, like all right thinking Zimbabweans is seriously affected by the current state of the economy. It is clear that a year after the election, the Zimbabwe economy has entered into the realm of a ‘U’ shaped recession that is likely to last for at least 10 years, unless THERE IS COURAGE TO ACT DIFFERENTLY to usher in a new discourse on the same.
Despite President Mugabe’s remarks over the weekend, ZIMASSET has been an embarrassing failure. For instance ZIMASSET promised to generate 2 256 000 jobs, 250 0000 low income housing units, a growth rate of 9%, 310 public schools and 300 clinics, in the next five years. The above figures would have entailed that in year one, 451 200 jobs would have been created, 50 000 low income houses built, 60 public schools built and 50 clinics constructed.
Quite clearly, a year later ZIMASSET is in massive deficit, as the above figures will show. The economy is in comatose, arrested by stagnation and deflation. There is continuing and deepening poverty characterized by suffering and deprivation. It is clear that Zimbabwe’s growth rate in 2014 will be less than 2%, signifying a status quo of economic malaise characteristic of the depression years (1997-2008), a period where the economy lost 60% of its value. In the ‘U’ shaped depression that the MDC Renewal Team predicts, a further 40% of the economy is likely to be lost.
Of greater concern is the non-performance of the budget. The half-year report released by the Zimbabwe Revenue Authority (ZIMRA) on the 22nd of July 2014 shows a shortfall of 1% for the half-year period up to June 2014, with $1.72 billion having been collected against a target $1.74 billion. There is a serious budget deficit that is running close to 10% of GDP reflected in domestic arrears that are now close to $800 million. That the government is experiencing serious budget shortfalls is reflected by its failure to pay workers on time and only last week Deputy Minister of Labour, Tongai Muzenda was admitting that this would persist because the economy is in bad shape.
The underperformance of the budget has resulted in serious and unprecedented revenue collection methods by ZIMRA. ZIMRA’s collection methods involving garnishee orders, closure of bonded warehouses and attachments are exacerbating an already depressed situation. Companies are shutting down as a result of ZIMRA’s aggressive collection methods. Clearly there is need for rethink, a restrained and a softening up in order to avoid the unnecessary closure of companies.Advertisement

In the face of all this depressing status quo, the levels of Government inertia, Government policy inconsistency and inaction shock the MDC Renewal Team. Clearly, there is a crisis of leadership resulting in the orphanage of the Zimbabwean economy. Besides orphanage, debate around the economy is characterized by point scoring, shallowness, artificiality, intolerance and disrespect. The government’s attitude that it knows it all and will not listen to helpful alternative opinion is retrogressive and predatory.
Equally, an approach that merely identifies government failure and Zanu PF’s structural cluelessness is unhelpful. In the face of this critical crisis, the MDC Renewal Team believes that the country urgently needs the COURAGE TO ACT DIFFERENTLY to achieve a sustainable economic turnaround. We propose a new discourse that is anchored on the reality that we cannot expect solutions from the same people who have created the problems. We clearly need a new approach and a CONSENSUS APPROACH towards the normalisation of the economy.
We propose a CONSENSUS discourse underpinned by dialogue and inclusivity. We argue that the fist of exclusion and hubris must open up to the palm of inclusion, dialogue, respect and tolerance. We thus propose the discourse of CONSENSUS anchored around a THIRD WAY of doing things and the COURAGE TO ACT DIFERENTLY. Our THIRD WAY on the economy proffers the following SIXTEEN POINT PLAN …

The convening of an all stakeholders’ dialogue on the economy.
The immediate leveraging of Zimbabwe’s resources in the mining sector.
The immediate addressing of Zimbabwe’s debt question and the execution of Zimbabwe’s home brewed debt program, ZAADDS.
In the post ZADDS era, establishing a $15 Billion Construction Fund to deal with gross capital formation and infrastructure deficit in the country.
Address rural poverty, and the dual enclave economy through a sustained policy of rural development.
The immediate unconditional re-engagement and dialogue with key members of the international community including SADC, the AU, China, the EU, the UK, the US and other countries.
Immediate dialogue with the African Development Bank, African Import Export Bank, the PTA Bank, the Development Bank of Southern Africa, over support to issue a $2 billion international bond that will be directed as an immediate stimulus for Zimbabwe.
The immediate unconditional repeal of the Indigenisation and Empowerment Act and the articulation of an alternative broad based empowerment and upliftment model that is transparent, fair and just as envisaged in Article 14 of the Zimbabwean Constitution.
The execution of an aggressive strategy to attract external capital flows in the form of ODI and ODA.
Stopping the tide of de-industrialisation by among other things recapitalizing ZETREF and DIMAF.
Capitalising the Central Bank and re-establishing the lender of last resort status.
Abandoning the US dollar in favour of the Rand and the joining of the Rand Monetary Union.
Putting a full stop to the land question by stopping any further farm invasions and more importantly restoring a land market in Zimbabwe through among other things, the provision of bankable title to all beneficiaries of the land reform programme and full compliance
Securing the rule of law in a bid to restore trust and confidence by full and unconditional implementation of the constitution.
Altering the false accumulation model based on extrication to one of beneficiation and value addition.
Restoring the Social Contract and full implementation of the Kadoma Declaration.

The current government, given its structural challenges around power, succession and its failure to renew, can never implement the THIRD WAY we propose. The MDC Renewal Team thus strongly believes that the successful implementation of the THIRD WAY and consensus discourse on the economy can only be implemented by a National Technical Transitional Council (NTTC).
The NTTC must be made of competent Zimbabweans whose mandate will be to put in place measures to turn around the economy and create conditions that enable Zimbabweans to use their creative energies to build a better society for all.
For the sake of completeness, the NTTC is not another GNU and the experts who make it up should be non-political and shall be barred from participating in the next election. The MDC Renewal Team, as genuine patriots, thus calls for the COURAGE TO ACT DIFFERETNLY and for the implementation of the THIRD WAY as suggested.
It surely cannot be business as usual