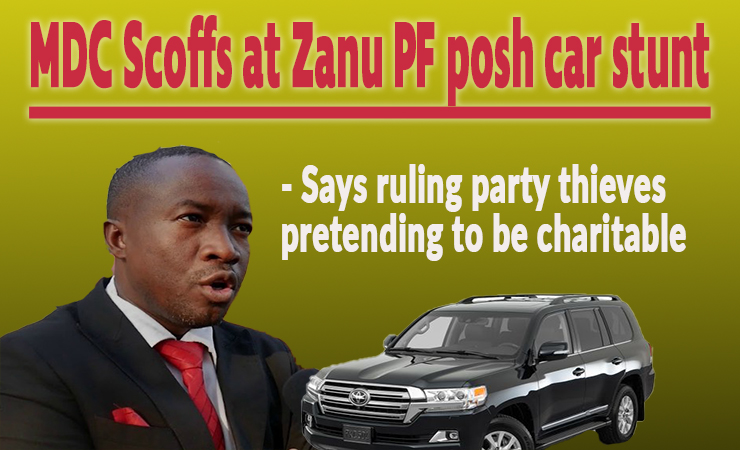 THE MDC has scoffed at an offer by Zanu PF legislators to give up expensive all-terrain vehicles and other luxury perks so that the cash-strapped government can direct resources to more pressing commitments.

MDC spokesman Jacob Mafume dismissed the ‘gimmick’, effectively saying thieves could not be commended for supposed acts of charity.

Zanu PF leaders, he explained, looted billions of dollars from the country over the years with some of them owning more than half of real estate in towns like Victoria Falls.

“They must first give up what they have looted in the last decades,” Mafume told NewZimbabwe.com.

Corruption scandals that have left some of them owning half of certain towns, diamonds worthy billions of dollars that they looted, must be paid back to the citizens.”

“They have already looted big over the years and have many luxury cars and mansions, their party gave them brand new vehicles just before the elections,” he said.

“This is the context you should critically look at their move to refuse new vehicles. It might be a mere publicity stunt while they get the same cars under the party and public coffers are diverted to support them.

“So, let’s be circumspect and a bit inquisitive about this public relations stunt.”

Legislators made the luxury car demands – expected to cost government millions of dollars – at a time government was refusing to hike its workers’ wages resulting in strikes by junior doctors and threats of a civil service-wide job action.

But in a gesture supposedly aimed at showing that “we are alive to these genuine concerns raised (and) also aware of government’s fiscal position” Zanu PF chief whip Pupurai Togarepi revealed that ruling party MPs were giving up on the posh cars.

“ … we are ready to forgo the luxury vehicles that come with our parliamentary positions as we are representatives of less privileged people whose only access to health is public hospitals,” said Togarepi.

“We are talking about having a world class Parliament, but we only have a one-course meal and the dessert is an apple and a banana, yet when we go out to other areas we get trifle, a nice fruit salad, custard, ice cream and all that.

But, look at what we get here – a mere banana and apple! There is no soup.”

Despite backing Mliswa at the time, Zanu PF has backtracked on the demands, exposing its opposition rivals as being more interested in their welfare than addressing the needs of their constituents.

Mafume, however, accused the ruling party of trying to deceive Zimbabweans.

Zanu PF MPs, he explained, could not pretend to be giving up vehicles that have not been provided.

In addition, most of them were also given new vehicles by the party ahead of the July 30 elections.

“Zanu PF cannot give up what they have not taken,” Mafume told NewZimbabwe.com.

There are no cars that have come, and but they are new driving cars that they took for each other during the election campaign period.”