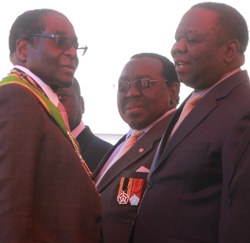 WHEN the MDC was formed, it triggered a lot of enthusiasm, heavily laced with hope that, finally, a real chance for a change of government had arrived.
After decades of misrule, economic ruin and political heavy-handedness, the people of Zimbabwe could not hide their merriment at the arrival of the MDC.
Even Mugabe was caught completely off guard by not only his dwindling support but also by the passionate public support the MDC received.
The fact that the leader of the MDC, Morgan Tsvangirai, had waged previous wars against the government on behalf of his union electorate added to the hope that this man and his party and, with the obvious overflowing support shown by the people, would deliver the country and the people from Zanu PF bondage.
Starting with the referendum for a new constitution in 2000, the MDC succeeded over Mugabe in urging people to vote against the draft constitution.
Then came the parliamentary elections about six months later in which the MDC, hardly able to campaign freely due to the hostile situation that had erupted a few months earlier after the rejection of the draft constitution, won 57 seats against Zanu PF’s 63.
Things would never be the same for Zimbabwe or for Zanu PF!
There was no doubt that people were ready and keen for change and were eager to retire Zanu PF. However, Zanu PF, always riding on the back of exaggerated liberation war exploits, used every trick in the book against the MDC and unleashed violence from which the nation still suffers today.
In 2008, the people, once again, made their intentions clear by giving the MDC leader a clear win over Mugabe and, once again, caused the cornered Zanu PF to unleash violent retribution, which forced Tsvangirai to pull out of the run-off election against Mugabe.
Clearly, from this trend, the people of Zimbabwe showed that since the MDC’s formation in 1999 until 2008, they continued to give their support to Tsvangirai and his MDC.
While the MDC’s popularity rode on the people’s expectations and hopes of opening new chapters, Zanu PF was being retarded by years of wreckless governing, poor economic foresight, corruption and its failure to deliver a better life for the people.
The resultant fiasco of the 2008 elections produced a unity government which, in retrospect, was a bad idea for the MDC, however well-intentioned it was.Advertisement

Although the MDC was and is “the ruling party”, Zanu PF holds all the cards and controls vital ministries, like defence and police, and other state organisations, like state media, etc.
This unworkable marriage of political convenience guaranteed that the MDC would never be able to implement most of their policies and agenda for the nation.
Indeed, they spent most of their time squabbling among themselves at the expense of governing the nation.
Meanwhile, the MDC started to made positional changes which did not have the people’s blessings. The MDC started not taking orders from the people, making unilateral decisions. Even signs of dictatorial tendencies started to show.
MDC parliamentarians and ministers slowly got caught up in the greed and corruption that the nation had witnessed from Zanu PF and, bit by bit, it grew difficult to distinguish between the two camps in parliament.
Gone was the rhetoric and spirit to stand firm for the people. Gone was the fight against corruption. Gone was the desire to bring about real change.
MDC leaders were fighting for personal survival and started caring less and less for the people or the mandates given them by the people.
The old adage that ‘if you can’t beat them, join them’ took a firm stand as MDC parliamentarians joined their Zanu PF colleagues in making financial demands and other perks on a nation that could hardly afford a unity government at a time when ordinary Zimbabweans were going to bed hungry.
The people started to doubt the sincerity of the MDC and that trend should not be underestimated because, to the people, it has become more and more difficult to distinguish between MDC and Zanu PF parliamentarians and that is very dangerous for the MDC.
There is no doubt that the MDC started out with the best of intentions; they said the right things and actually did the right things and people responded very positively… then they joined Zanu PF in a unity government.
Mugabe is no fool, he used the same tactic that he had used on ZAPU seniors who went around the country extolling the virtues of uniting with Zanu PF. The perks were just too much.
Mugabe slowly let MDC parliamentarians and minister wallow in luxury as they were baited to enjoy the perks of government, something that even Tsvangirai himself has been criticised for.
Suddenly, the people were on their own and now Zimbabweans are going to be forced to choose between two parties that have shown bad judgment in the four or so years they have been in partnership.
“In democracy, the purpose of public office is not to fulfil personal ambition,” said George W. Bush just last month. “Elected officials must serve a cause greater than themselves. The political winds blow left and right, polls rise and fall, supporters come and go. But in the end, leaders are defined by the convictions they held.”
The heart of the matter is that the MDC must never underestimate the damage it has caused to itself because, to the people, there is nothing more frightening than when the face of an enemy starts resembling theirs.
The people will not let that happen.
Although the MDC achieved modest success in some areas, on the whole, it is still doubtful that joining the unity government was a wise decision. The MDC has no record to run on and what they did in the unity government falls far short of people’s expectations.
Apart from that, their way of running their party and government leaves a lot to be desired.
The MDC squandered many opportunities and defied its own supporters on many occasions and this might come to haunt them, especially since the MDC has more to lose than Zanu PF.
Through its own greed and carelessness and individual ambition on the part of its leaders, the MDC has campaigned a great deal for Zanu PF.
Although I believe the MDC will come out tops, the margin of the win, however, is going to be a disgrace for a party which once upon a time commanded the love, respect, hope and goodwill of the people.
And it might just be too late for the MDC to do anything about it.
The MDC must not take shortcuts and must remain well-aligned with the people. We have had enough of a political party that puts itself above the people. A political party, like a government, is there to serve the people not the other way round.
Tanonoka Joseph Whande is a journalist and contributor to SW Radio Africa