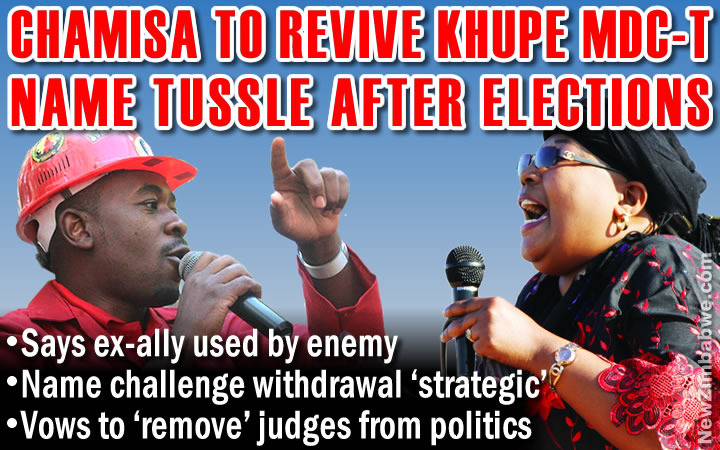 MDC-T leader Nelson Chamisa has hinted at plans to use his possible incumbency as the country’s next leader to upstage Thokozani Khupe in the former allies’ fierce tussle for the main opposition’s name and logo.

The country’s holds its harmonised elections July 30 with wide hopes from the opposition the young Presidential hopeful could land the top job.

Meanwhile, Chamisa is locked in a fight to keep the popular opposition’s name and logo following a power wrangle that saw Khupe, former party Deputy President, form a splinter group.

Chamisa, who is also MDC Alliance presidential candidate, feels his bid to wrest control of the party’s properties has been hijacked by rivals within Zanu PF who are keen to head into a crucial election with a feuding opponent.

Addressing party supporters during a rally in Marondera Sunday, Chamisa vowed to revive his wrangle with his erstwhile ally.

However, last week, he made a surprise withdrawal of his court challenge.

He told MDC Alliance supporters at Rudhaka Stadium he made a “strategic” decision to remove the matter from the courts after realising that the case was being politicised.

The MDC leader said should he win the coming election, he would ensure that local judges were “removed from politics”.

“That is why I removed my case against Khupe from court.  I realised that Khupe had agreed to be used by Zanu PF against the people.  However, I will revive the case after the elections,” Chamisa said.

He said as a lawyer, he respected the country’s judges as he also at times gave advice to them during court sessions.

In his rally address, Chamisa also urged the army to keep away from national politics and concentrate on defending the country.

“The military should not involve itself with Zanu PF.  We honour you but don’t be used like Zanu PF youth cadres.  We have no issue with the army.

“We want to change those who are saluted not those who salute.  We won’t change the hierarchy of the army.  It is the country that is changing power on July 30,” he said.

The military has pledged its neutrality in upcoming elections and dismissed suggestions it would deploy service personnel to influence national polls scheduled for July 30.