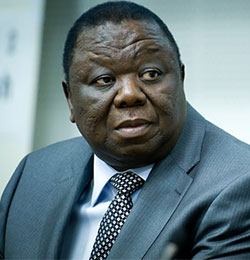 MORGAN Tsvangirai sharing a podium with former ruling party ‘debris’ in the form of Temba Mliswa and Jabulani Sibanda for the common cause ‘to force Mugabe’s hand out of power’ was probably one of the most sardonic moments in the political history of Zimbabwe.
The event was supposedly meant to be a ‘prayer meeting’ about a Zimbabwean citizen whose whereabouts are unknown and to say the event was hijacked by many elements with different agendas is an understatement. Many, if not all, were trying to outdo each for individualistic political self-reinvention.
It was a mish-mash of former ruling party rejects relishing among the opposition ranks, many political lightweights clamoring for attention and Tsvangirai himself in awe at the prospect of working with discarded former ruling party members. What a palaver!
The message from all those who took to the podium was a misguided call urging the people of Zimbabwe to rise up against the so-called tyranny of Robert Mugabe. This was a prayer meeting meant to comfort and sooth the soul of the family of the man who allegedly disappeared and not a platform to revive ailing political careers of the many who ‘graced’ the podium.
Some of those who took to the podium were until recently profusely punching their fists in the air with unmoving resolve in support of the ruling party, which they were now chastising alongside Tsvangirai. The picture of Mr and Mrs Tsvangirai holding the children of the missing man is an image that tells a thousand inexactitudes.
The trouble with all those who attended this ‘prayer meeting’ was their inability to be open about the outcomes they expected as a result of them being present. The gathering suffered an infusion of individuals with an inability to stand for any real principle or direction and the result was an ill-conceived chorus of insinuation which appears to urge citizens to use unconstitutional means to whatever end.
The former ruling party ‘relics’ who attended spoke with a misleading desperation in a bid to enlist recognition within opposition ranks. Jabulani Sibanda made this wretched claim that “when leaders are elected into power, they forget where they came from. They forget that power came from the people”.  He appeared to have been targeting President Mugabe as he went on to say, “For 35 years we never knew we were Zimbabweans”.Advertisement

This is a ridiculous statement built around a forlorn core of defeatism and desperation. The fact of the matter is that for the past 35 years Zimbabweans have in fact got the opportunity to be Zimbabweans and the irony is that many do not even realize it. These futile attempts at jumping on the back of an allegedly missing person to score political points are self-serving in nature and urging any form of unconstitutional usurpation of power is a lost cause.
The way that many political has-beens and novices are trying to hijack this alleged disappearance is opportunistic and totally unrelated to the supposed disappearance itself. Simba Makoni, in a disconnected rambling that sought to appeal to and whip up national emotions, claimed categorically that President Mugabe knew where this missing man was. Makoni had this to say “How can he (president’s spokesperson) just say Mugabe, as president of this country, is unmoved by the missing of one of his citizens yet he is obliged to protect all citizens living in the country? It shows that the state knows where Dzamara is, hence they would want to act as if it is a forced disappearance which the state had no hand in”.
This supposed ‘disappearance’ is being used as a bargaining chip by the equally cheap and dysfunctional opposition in Zimbabwe to prop up lacklustre and uninspiring political careers. So Makoni wants President Mugabe to put everything aside and go in search of this allegedly missing man? In Nkulumane and Emganwini residential areas of Bulawayo, five children recently went missing and the families of these missing children have been going through hell. We have not heard Makoni or Tsvangirai mention the plight of these missing children, yet they hyper-sensationalize the case of one man whose whereabouts remain unknown.
This man (Dzamara) is a citizen of Zimbabwe and it is important that all citizens of the country are safe and as Charamba puts it, the matter is in the hands of the police. The hope is that he is well and as the police updates to the High Court reveal, something is being done.
If true, the recent report that the French Ambassador to Zimbabwe, Laurent Delahousse proposed a toast to this allegedly missing man, paraded his wife and children at the French National Day celebrations and then called him a ‘symbol and that he would not let him down’, is a worrying statement. How on earth did this man suddenly become a ‘symbol’ and for his family to be paraded at France National Day celebrations?
The claim that this man was allegedly ‘abducted’ in broad daylight in a barbershop, by ‘three’ or ‘five’ armed men in a residential area because of his criticism of President Mugabe is ludicrous. If that is the case then the likes of Job Sikhala and many others who publicly tear into President Mugabe – the person and the politician – would have disappeared many moons ago. But they walk freely and talk freely.
Something does not add up one bit about this ‘disappearance’ but what is clear is that either way it is never going to end well. If it was indeed a forged disappearance, it is going to be very difficult to bring this man back and definitely sacrifices are going to be made. The question to pose is, what would stop the opposition and their handlers from sacrificing him for their own political survival and better electoral fortunes come 2018? That is totally plausible, unless people come up with hard evidence that the state was behind this man’s ‘supposed disappearance’.
The police have done their investigations from the day the matter was reported to them, hence why Makoni’s assertion that President Mugabe is not concerned about this allegedly missing man is part and parcel of a more comprehensive plan to whip up emotions.
This man is not the first person to go missing in Zimbabwe, let alone the world, and he is not the last. The local opposition has created a rallying point to reinvent and reposition itself and they are using this alleged disappearance for their own political gains. The local opposition and the allegedly abducted are all mere tools in the grand scheme of things.
Time however has the stubborn habit of revealing falsehoods and truths that always puts the deceitful to shame. Only time will tell; and time is exactly what we have in abundance. The available evidence is pointing to more falsehoods than truths.
bernardbwoni.blogspot.com