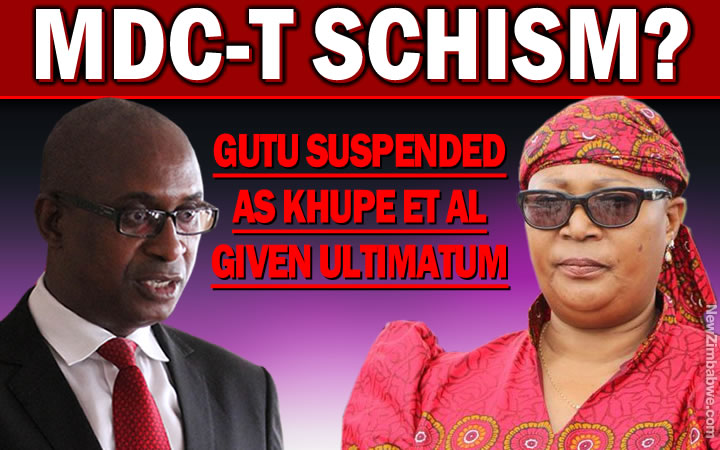 THE embattled MDC-T party on Thursday suspended its national spokesperson Obert Gutu with immediate effect while vice president Thokhozani Khuphe was given a seven-day ultimatum to shape up or ship out.

The decision to suspend Gutu was made by the national council which met for almost six-hours and came up with eight resolutions.

The deputy national chairman Morgan Komichi who was chairing the meeting cited unbecoming behavior as reason for Gutu’s suspension until a disciplinary hearing is held.

Whilst on suspension, Gutu will be replaced by Hon. Thabitha Khumalo who becomes the acting party spokesperson.

Gutu, a week ago, made an announcement saying he was going to dissociate himself from the “violent and thuggery” in the MDC-T.

Recently, he has been condemned by party officials for showing interest in Harare East constituency which was given to People’s Democratic Party (PDP) after the MDC Alliance resolved to share constituencies among all parties within it.

All party leaders in the MDC-T have also been ordered to stop communicating party positions without permission and as per the Constitution for purposes of message discipline and consistency.

Sources within the party also said Secretary General Douglas Mwonzora was cautioned and given a last warning over his comments and utterances in the media over constitutionalism and on-going squabbles.

“In line with Article 18 of the party’s constitution, we have resolved to give Vice President Khupe, Organising Secretary Abedinico Bhebhe and chairman Lovemore Moyo seven days to make a decision after which the National Executive would take action by operation of the law,” Komichi also said.