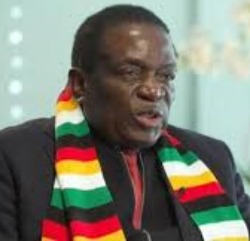 MDC-T national youth assembly has demanded the immediate resignation of President Emmerson Mnangagwa saying he has failed to govern the country and turn around the economy.
The youth chairperson, Happymore Chidziva, told journalists on Tuesday during a press conference that Mnangagwa lacks direction and vision on how to run Zimbabwe.
“During the First 100 Days of his administration, the socio-economic situation has worsened as evidenced by a sharp rise in commodity prices.
“The cost of living has gone up since he took oath in November last year. Since the ouster of former President Robert Mugabe the situation in this country has become unbearable,” said Chidziva.
The youth leader castigated Mnangagwa for dispatching the army to Hwange’s Colliery Mine where spouses of the employees have been demonstrating for their husbands’ dues since 2016.
“Mnangagwa wants to repeat his early 80s strategy of militarising the Matabeleland region during the Gukurahundi era.
This is shown by his deployment of army to disperse protesting women who are sleeping in the corridors of Hwange Colliery mine demanding salaries of their husbands. We do not want another Gukurahundi again here in Zimbabwe.
“We condemn his move to militarise this nation and call upon him to step down as President of this country together with his deputy Constantine Chiwenga,” Chidziva fumed.
The youth chairperson also stated that Mnangagwa’s continued hate speech in his rallies must end immediately.
“This hate speech in Mashonaland Central and recently in Midlands must stop forthwith. Also we demand a stop to the continued force marching of children to his rallies where their studies are interrupted.
“He should fire his education minister Paul Mavima for ordering a rewrite of November Ordinary Level English Paper 2,” added Chidziva.
President Mnangagwa has promised to re-engage with the West to lure investors and recently, during his trip to the World Economic Forum in Davos Switzerland, reports said pledges worth over $3 billion were made but, Zimbabweans are yet to benefit from any of those promises made by the west.
Since taking over Mnangagwa has constantly told the world that “Zimbabwe is open for business”.
A few days ago, the United States government reportedly renewed sanctions on Mnangagwa and his allies in government, a development that is likely to affect the county’s development.Advertisement