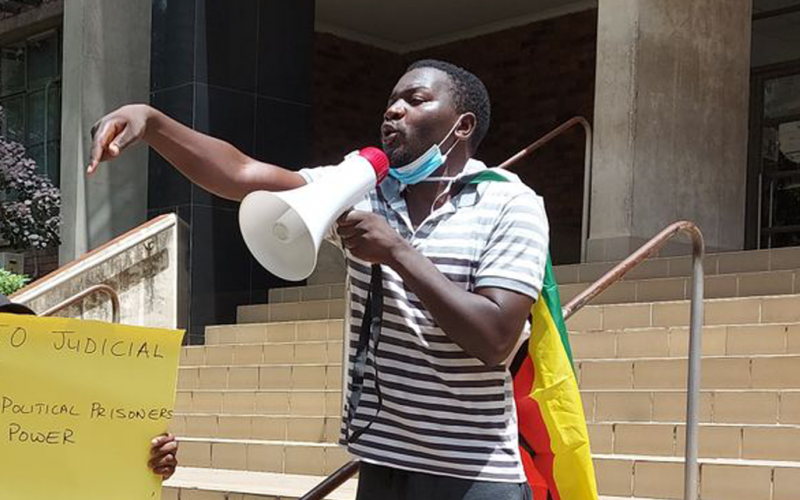 He was Tuesday sentenced to 24 months imprisonment on the first count before 10 months were suspended by Harare magistrate Judith Taruvinga who presided over trial.

The activist was further sentenced to 12 months for the second count before six were suspended.

The sentences will run concurrently.

Chuma said the sentence was “mind-blowing” considering the officer in question made it clear he never attempted to arrest Haruzivishe.

He said the sentence was so outrageous that even village courts sitting under trees could not perform such “miscarriage of justice”.

“The conviction of Mako and sentence does not only induce a sense of shock but confirms the capture of our courts by Emmerson Mnangagwa’s unpopular dictatorship,” said Chuma.

“Mako was convicted for blowing a whistle and for having resisted arrest by an officer who in court testified that he never attempted to arrest him.

“How does a whistle incite violence? What language does that whistle speak which can only be understood by those who arrested and incarcerated Mako?”

Chuma blasted the swiftness with which the courts have handed judgement on the opposition activist when there were several known Zanu PF politicians who have never been treated with the same harsh hand despite overwhelming evidence linking them to high level corruption.

“It stinks with deception and capture that the same court that granted freedom to criminals like (former health minister) Obadiah Moyo who stole in excess of US$50 million Covid-19 public funds had the audacity to jail Mako for a whistle.

“This is the same court that was ready to let airport gold smuggler Henrietta Rushwaya walk scot free without opposing bail only to pull an about turn following a public outcry.

“We have every reason to question the probity and independence of a court that let free criminals like (former public service minister) Priscah Mupfumira who stole millions of public funds.

“The worst form of incitement of violence is jailing of a young activist for speaking to issues that appeal to masses.”