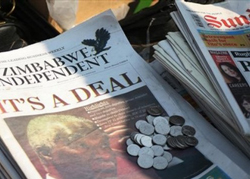 ZIMBABWE Media commission member Lawton Hikwa has called for the realignment of the media laws with new constitution which was adopted through a referendum in March last year.
The government has been reluctant to realign laws with the new supreme law which replaced the post-war Lancaster House constitution which had been used since 1980.
Addressing journalists at the Press Club on Wednesday, commissioner Hikwa who is also the Dean of Communication and Information Technology at the National University of Science and Technology, said media laws such AIPPA and the Criminal Law (Codification Reform ) Act are among laws which are ultra-vires with the new constitution.
“There are a lot of media freedom gains in the new constitution but unfortunately laws such as AIPPA are still a problem. We need to have new legislation,” said Hikwa.
Zimbabwean media laws have been widely condemned as being amongst the most stringent in the world. Dozens of journalists have been arrested while the courts have routinely condemned and ruled against these laws. But the government has remained unwilling to replace them.
Speaking in the same meeting the chairperson of the Voluntary Media Council of Zimbabwe (VMCZ) ethics committee Tapfuma Machakaire, lambasted the media for being unprofessional and unethical during the periods leading to the MDC-T and Zanu PF congresses which were marked by sharp differences within its top officials.
The MDC-T held its congress in October this year while Zanu PF held its own early this month.
“The birth of the MDC Renewal Team created a lot of interest in the media and similarly the clear lines drawn between the factions in Zanu PF also created a new wave of unprofessional conduct in our media,” said Machakaire.
The veteran scribe said the dramatic entrance of the First Lady Grace Mugabe into the political arena also created a fresh wave of unprofessionalism in the media.
He said: “The Dr AMai hurricane wave was another development that saw media organisations throwing ethics out of the window as they carelessly allowed unbalanced sometimes unfair attacks on individuals to be published without taking necessary precautions.” Advertisement