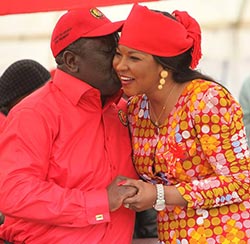 AN undisclosed but sensitive medical issue which has seen MDC-T leader Morgan Tsvangirai frequently visiting Nigerian prophet TB Joshua is at the centre of the former premier’s marital problems, a state newspaper reported Saturday.
Tsvangirai this week confirmed his wife, Elizabeth, was no longer living with him at the Harare mansion acquired for him by the government while he was Prime Minister in the last coalition administration.
The Herald newspaper reported that family members had said a “sensitive medical issue” was at the centre of the marital dispute.
And speaking extensively for the first time on the issue, Liz denied reports that politics and her husband’s defeat in the July 31 elections were responsible for their problems.
“A lot has been said and written about how I am to blame in the current situation between myself and Mr Tsvangirai. It is not my intention kufukura hapwa, kubvisa matenga akafukidza dzimba or awaken sleeping dogs,” she told the Herald.
“Let it be known that it is every woman’s dream to be happily married in poverty and even in the midst of plenty,” she said.
“He (Tsvangirai) knows the genesis of the problem, what steps he has been trying in vain to address the situation, including visits to TB Joshua and others.
“The paralysis between us has nothing to do with the outcome of the July 31, 2013 elections, MDC-T, any other political entity, foreign hand or material worth.
“The matter is both personal and circumstantial and only him and not even relatives, friends or party comrades can solve.”
The couple have not been living together for a month with Liz, the daughter of a senior Zanu PF official, moving to their other residency in Harare’s posh Borrowdale neighbourhood.
Liz, who married the MDC-T leader in September 2012, said the former premier should also stop crying victim over their problems.
She said: “Crying the victim or casting aspersions on anyone, including myself, is not only a self-serving sympathy-seeking gimmick but intellectually, factually and morally dishonest stance to take as close friends from both sides of the families and relatives know.
“I shall not be drawn into a public discussion of my marital life since it is a private matter and private matters are best solved privately.”Advertisement

Tsvangirai denied reports that a bid to marry the younger sister of his late first wife Susan – which Liz opposed – had worsened the situation.
He said while Leah Mhundwa was “given” to him by her family as part of a Shona cultural tradition after Susan’s death in a 2009 road accident, he never intended to formally marry her.
“We will sit down and discuss them as two mature adults,” said MDC-T leader.
Lifting the lid of his separation on Tuesday this week, Tsvangirai insisted he still loved his wife, adding he was confident the marriage could be saved.
“As far as I am concerned, I am still married to my wife and there is no reason to talk about separation or divorce,” he said.
“Marriage is about two people mutually committed to love and support each other and to be happy. If there are any differences which may arise, which is not something exceptional, we will discuss them as two mature adults.
“That is what I am committed to. Ours is a marriage that is in the public domain and therefore public scrutiny is natural but the truth is that there is no separation that I am aware of.”