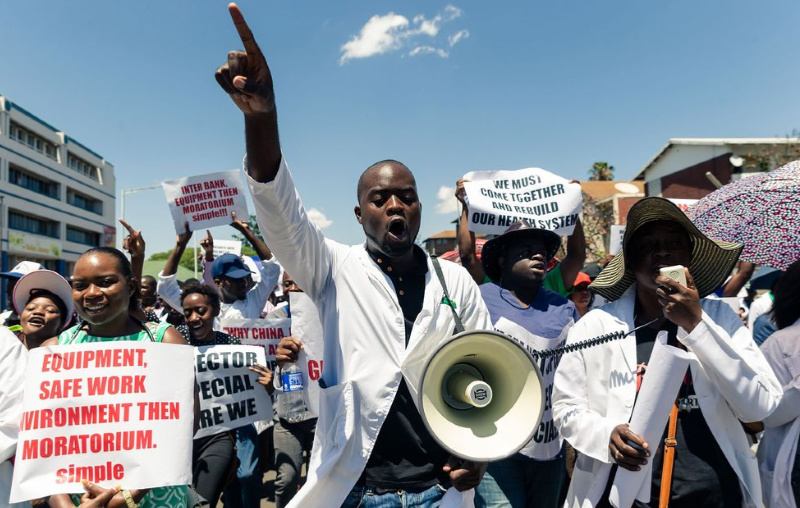 MEDICAL practitioners have expressed strong reservations over the proposed Health Services Act which seeks to outlaw strikes by health workers.

Speaking at a meeting organized by the Zimbabwe Association of Doctors for Human Rights (ZADHR) and Southern African Parliamentary Support Trust (SAPST) in Bulawayo, medical practitioners said instead of coming up with the draconian law, the government should  address numerous challenges facing health workers.

ZADHR Secretary General, Norman Matara described the bill as undemocratic and a recipe for brain drain.

“Health workers will not be allowed to go on industrial action. This is more of muzzling voices and forcing them to work under unbearable conditions,” said Matara.

“Right now medical personnel are paid low salaries, some are actually going out of the country because of this. If passed, it will increase pressure to leave as currently health workers are working under very stressful conditions.”

Other health workers also concurred with Matara saying the act is tantamount to banning of industrial actions as well as trade unionism in the health sector.

“The government should rather focus on increasing public health sector funding in order to address their salaries, shortage of Personal Protective Equipment (PPE), overburdening work schedules and health worker migration. It does not address the issue of incapacitation yet the industrial action is a result of that,” noted the worker.

Philip Muziri, a legal officer with SAPST said instead of resorting to “criminal sanctions” the government should abide by the employer to employee contractual obligation.

“If you use criminal sanctions, it creates problems because the state must not only depend on the use of coercive apparatus to subdue differences they have with the employee but use other remedies,” said Muziri.

The proposed bill gives the Health Services Board regulatory powers which will be exercised with the approval of the Minister of Health and Child Care while fixing salaries, allowances and other benefits.