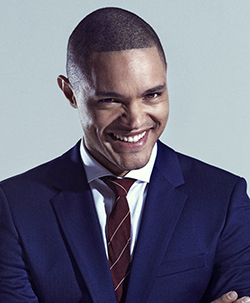 JOHANNESBURG: Our guy Trevor Noah has made New York City his permanent home after landing a hot new gig as the host of The Daily Show.
And, after breaking up with his girlfriend, Dani Gabriel earlier this year, we knew it wasn’t going to be long before someone caught his attention.
Hello. He’s cute, he’s got an uber cool job, hangs out with international celebs, is funny and South African. Trev totally ticks all the boxes.
Respected U.S entertainment magazine, US magazine first broke the news, saying Trevor has been linked to model and singer, Jordyn Taylor.
Here’s what we know:
How they met:
Apparently Jordyn and Trevor first met just after he moved permanently to NYC earlier this year, just a few weeks after he ended his relationship with his ex. Taylor is originally from L.A, but things have apparently moved quickly between her and Trevor, with the two now reportedly living together.
Who is she?
She’s an auto-show model for RAM, modelling at dealer shows. As a teenager, she entered into singing competitions and was featured on the then MySpace charts. One of her songs was also featured in Isla Fisher Confessions of a Shopaholic movie.
The clues:
While they haven’t confirmed their relationship, the timing of various posts on social media has linked the two being together in South Africa at the same time and place. It’s believed that Trevor has introduced her to his family as they have been together for five months now.
Jordyn Taylor – Over You