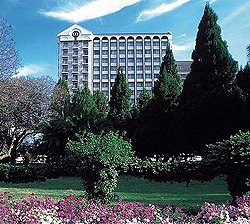 MEIKLES Hospitality says it has completed an US$8 million refurbishment of Meikles Hotel in Harare.
Mekiles embarked on the facelift in the first quarter of last year and is ready to tap into the influx of tourists expected in the country owing to the improving political environment.
Tham Mpofu, the Commercial Director of Meikles Hospitality, on Tuesday said there had been many encouraging signs of renewed growth in travel and tourism.
Meikles said it was discussing with property developers in Zambia for the construction of a hotel in that country as the company expands into the region.
According to the group, the hotel will be part of a mixed-use retail scheme being developed close to the Lusaka Airport.
“Along with our many colleagues throughout the sector, we look forward to increased interest in Zimbabwe as a destination for travellers of all kinds, especially in the upper end of the business and leisure markets, which is where Meikles is positioned as the natural and first choice,” Mpofu said.
Mpofu said the refurbishment of the hotel is expected to enhance the competitiveness of the hospitality group and was in line with local tourism industry objectives of improving quality of products and services.
“What must be acknowledged is that, although we have come through the recent years of challenge and are ready to meet the future with strength and energy, Meikles Hotel, in common with all operators within the sector, has had to address issues of a physical nature and has had to undertake investment and expenditure to bring its infrastructure up to the highest possible standard and create for itself a fresh new look for the 21st century that matches the keen and warm welcome extended to customers,” she said.
Mpofu said they acquired new banqueting furniture and equipment and undertook various upgrades of product and service, such as the introduction of new beds and flat screen televisions for all rooms and suites.
There has been changes in food and beverage operations, where the company introduced new menus, new wine lists and new styles of cuisine and presentation.
“Our biggest undertaking has been the US$8 million refashioning of the North Wing to prepare it for what we hope is a brighter and busier future and to allow this hotel to retain its reputation for building on a solid foundation of experience and tradition while utilising innovation, imagination and creativity to give our guests an experience that is unmatched in this market,” she said.Advertisement

Over the past 98 years, she said, Meikles Hotel has been a trend setter and a market leader and aims to retain this position.
“We present as our offering the finest of the past and the most exciting of the future. In doing so, we recommit ourselves to providing service standards of the highest quality, ensuring that our whole team retains and enhances its customer focus with a commitment to excellence across the board,” she said.
Meikles has 142 bedrooms and suites which have all been refurbished.