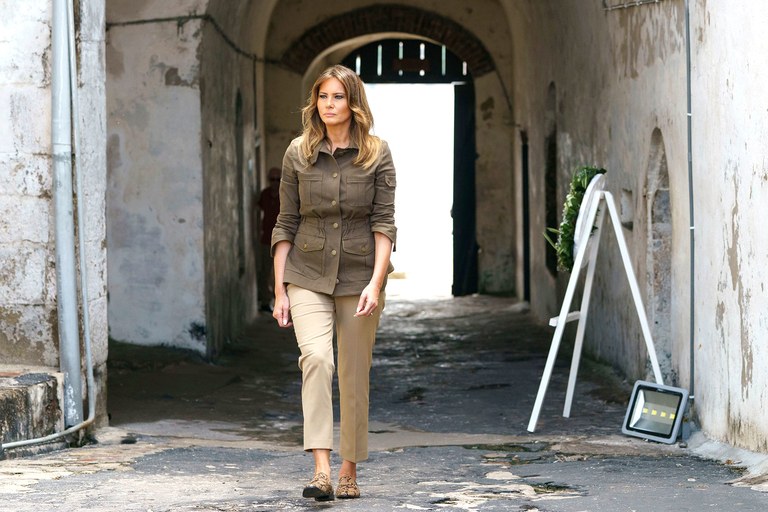 US First Lady Melania Trump visited a former slave trading fort in Ghana on Wednesday, the second day of her maiden solo tour of Africa promoting her children’s welfare programme.

“Akwaaba (Welcome) to Cape Coast,” read a sign hung from the whitewashed walls of the Cape Coast Castle, some 145 kilometres (90 miles) from the capital, Accra.

But there were signs that the soft diplomatic push was yet to take off locally, as comparisons were drawn to the visit of former US president Barack Obama and his family in 2009.

“The interest is very, very muted and subdued. There are a lot of people (in Ghana) who are extremely indifferent about this visit,” political commentator Etse Sikanku told AFP.

A relaxed and smiling Melania Trump arrived in Accra from Washington on Tuesday to a red-carpet welcome of traditional dancing and flag-waving schoolchildren.

In a day of engagements as part of her “Be Best” campaign in education and healthcare, she handed out teddy bears to newborns and met her Ghanaian counterpart, Rebecca Akufo-Addo.

The highlight of Wednesday’s itinerary was the tour of Cape Coast Castle, a major outpost on the Atlantic slave trading route, where she also met members of the local Fante tribe.

The imposing fort on the windswept coast, where untold numbers of people were kept in dark dungeons before being shipped overseas, is now on the UNESCO World Heritage List.

It has seen a steady increase in visitors since Obama and his family toured the site.

Obama — whose photo now adorns the wall of a hall renamed in his honour — said at the time that the cells were a reminder that “sometimes we can tolerate and stand by great evil even as we think that we are doing good”.

Carve her own path

The first lady’s visit to Ghana, Malawi, Kenya and Egypt has been seen as an attempt to carve her own path and emerge from her husband’s shadow and his divisive presidency.

It also comes after another turbulent week for the Trump administration, with controversy about his pick for the US Supreme Court, who has been accused of sexual assault.

On Tuesday, President Trump openly mocked the university professor who made the allegations, drawing scorn from critics who said such taunts deterred survivors of assault.

In Africa, interest in Melania Trump’s visit is being watched to see if she can mend fences after her husband’s reported comment that the continent contained “shithole” countries.

Those who met her on Tuesday said they found the enigmatic former model “warm” and “gentle”, although she made no speech and on Wednesday was heard largely thanking local dignitaries.

Overall, there were doubts the visit would radically alter existing ties.

The first lady wants to highlight the work of the US Agency for International Development, even as her husband looks to slash aid and restrict it to perceived friendly nations.

The president has shown little interest in Africa since coming to power but tweeted about his wife’s meeting with new mothers: “Proud of our great First Lady – and she loves doing this!”

Photographs of the two first ladies featured on the front pages of major newspapers in Ghana while the visit was talked about on morning radio shows.

But there were complaints about children being taken out of school to welcome her as well as the choice of visiting the newly built and well-equipped Greater Accra Regional Hospital.

Some presenters said it would have been more accurate to show a more under-resourced hospital.

Shared photos on Twitter showed just a handful of people at the side of the road as Trump’s official convoy passed.

Sikanku said comparisons with Obama’s visit were inevitable and contrasted the “pomp and pageantry” surrounding his arrival and the interest generated by his Kenyan heritage.

“It was like a big party, everybody was into it, people stood on rooftops, everybody wanted to see Barack Obama, the son of Africa,” said Sikanku, author of “The Afrocentric Obama and Lessons on Political Campaigning”.

But for Melania Trump, “you wouldn’t know about it unless you were following the news”, he said.