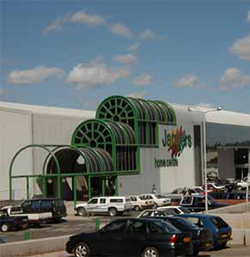 THE failing and ailing local industries are literally having King Pharaoh’s Army behind them and the Red Sea in front. May the Moses of our time please stand up!
Since taking oath, Cabinet’s position on rescuscitating local industry has been loud, clear and consistent. The expectant industrialists can’t wait for that action any second longer.
The most immediate and terminal threat is the extent of menacing litigation that is sinking companies. This has spread to even affect several listed companies. Deputy Sheriffs, Liquidators and lawyers are harvesting rich returns in winding up these companies leaving creditors poorer. Some of the entities that are litigating against local industries, and in many cases winning in getting Writs, are government departments and parastatals.
We have seen local companies valuable plants and machinery auctioned at paltry values by the courts to settle debts owing to NSSA, ZIMDEF, City of Harare and many others. This simply shows that our government is blowing hot and cold on the recovery of local companies by letting their entities go after local industries properties.
It is foolhardy for NSSA to recover outstanding premiums from a company by selling its assets, causing the loss of jobs for the remaining personnel who will end up attempting to make premature claims.
The delibetating prevalent credit crunch is affecting everyone including farmers, peasants, traders, politicians and the general citizenry. Government has made a bold decision to ensure that the debt-ridden farmers are given space and allowed to produce for the country without the encumbrances of litigation for some period. Bravo to that!
However, it follows logic that industries, which buy these agricultural produce must be afforded the same reprieve to ensure that the country consolidate on the levels of beneficiation of yesteryear.
The fall or failing of Cairns, Jaggers, Caps, Blue Ribbon, AfriAsia Kingdom, Dairibord and other 700 companies as reported in the NSSA’S Harare Regional Employer Closures and Registration Report of this month, happening under the watch of this country’s leadership is, at the least, regrettable.
Whilst Government is making strenuous efforts to obtain fresh capital through the Bretton Woods Institutions and other sources, it must, in the meantime, execute rescue measures within its power that save the few industries still operating, albeit on their knees. A short to medium term moratorium on litigation and evictions must be pronounced to allow companies to recover.Advertisement

Many investors who are keen to invest in some local companies are being turned away by ongoing litigation against these local companies. More than 98% of judgment creditors are unable to recover their value through the court process because the same liquidity challenges that confront the judgment debtor are also affecting the would-be bidders at auction. So what’s the point?
Local lending banks’ balance sheets are healthier showing security held of defaulting debtors than auctioning these houses and recover a tenth of the value. The current laws we are using to recover debt are no longer effective and relevant under the current financial crisis.
Government has been asleep while companies are levied the world’s most atrocious interest rates on the greenback of more than 20 percent per annum. It seems we now have loan sharks masquerading as lending banks in this country. The need to borrow in Zimbabwe, at both company and government level, is at an all-time high but policy makers have not seen the need to come in and regulate these interest rates.
The revolutionary party’s manifesto on industrialization recovery will not be achieved if the current mortality rate is not tamed. At the least, and in the absence of funds to capitalize industry, the powers that be must make sure that companies remain open.
Companies cannot to be seen to seek refuge at the courts on the basis of judicial management when the elected political leadership has all the legal instruments at its disposal to save the ailing companies at the stroke of a pen.
The targeted 1,000 companies will not be available for indigenization. It’s a pity that some of the most treasured plant and machinery, which are vital, is sold like flea market inventory. Whose interest are we saving? Certainly not the economy!
There is need for Creditors and Debtors to sober down and allow for recovery. Lobels, the country’s pride, was given another lease of life thanks to CBZ bank, other progressive financial institutions and a competent management. Today, Lobels’ operations are enriching consumer product choices and enhancing food security.
It is as urgent as it is critical to immediately stop haermorghage of companies. The utility debt cancellation on citizens must be extended to companies who provide income to these citizens. The disappearance middle income class, due to company closures induced job losses, spells doom for any prosperous economic prospects.