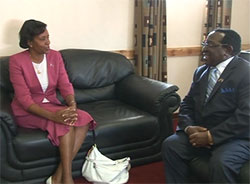 FOR more than 20 years after Independence, President Robert Mugabe gave with a shovel to Zambians and he is now receiving a spoonful of assistance. Siamese twins my foot!
In the past three decades Zambia and Zimbabwe have never both enjoyed economic prosperity at the same time and hence many expected that, in the African spirit of neighborliness, the two would equally reciprocate by assisting each other during times of need.
The attitude of Zambia’s post Kenneth Kaunda presidency towards Zimbabwe has never shared our affliction. The major commodity traded by these two former British colonies since black majority rule is maize. Millions of tones of maize were exported to Zambia from Zimbabwe up to about 2003. In fact, Zimbabwe over exported and ran down her Strategic Grain Reserve in early 2000s to help arrest the biting food shortage prevalent in Zambia at that time.
Zimbabwe has been battling to attain above national requirement maize harvest since 2002, leaving the country with no choice but to get maize from Zambia, which was, ironically at that time, enjoying bumper harvest. Zambia has been demanding upfront cash payment and when these payments are made, there have been and still react very painfully slow in preparing the maize stocks for dispatch.
The Food Reserve Agency Zambia (FRAZ), has the habit of holding hundreds of Grain Marketing Board hired trucks stranded at the collection points for several days before loading. The maize, in many cases, is fumigated on the supposed date of collection, delaying the loading for a period of more than 2 weeks as the chemicals subside. The loading is manual and very time consuming.
In 2006, in an attempt to quicken the loading process, GMB had to send over a hundred personnel to load the maize but the Zambian Immigration Department changed its mind a few hours later and ordered the whole team back to Zimbabwe before they even started work.
It must noted that at all material times, Zambia bought maize from Zimbabwe on various terms other than cash. In fact, as late as May 2013, Zambia still owed Zimbabwe for maize sold in 2002.  We now hear that Michael Sata Administration is demanding cash upfront. Is this how Siamese twins treat each other?
One must be pardoned for trying hard not to vomit and frown when the Zambian Ambassador to Zimbabwe, Ndiyoyi Mutiti, appeared on national television and said: “The decision was made long ago that Zambia is going to give Zimbabwe maize and the decision was made at the highest level so there is no backtracking. Usually when technocrats work on the modalities of implementing a decision, sometimes they run into bottlenecks and these are the bottlenecks that both Zambia and Zimbabwe are committed to ironing out. So as President [Michael] Sata said, he does not want the people of Zimbabwe to starve in as much as he does not want the people of Zambia to starve.”Advertisement

The madam Ambassador must tell us whether the maize is strictly on cash basis or open account terms, which Zimbabwe used to extend to her country. There are no bottlenecks here and technocrats must not be sacrificed for diplomatic expediency.
Several Zimbabwean millers and grain traders were owed more than US$12M dollars of maize as at February 2013, which was prepaid more than two years earlier.  Its practically impossible to litigate against The Food Reserve Agency Zambia (FRAZ) and so the best one can do is to bribe FRAZ officials so that you may start receiving the maize you had paid for.
Historically, Zambia has never been receptive to Zimbabwean exports opting to favor South African products. In 2001, Zimtrade, the country’s export promotion body, opened a permanent office in Lusaka and also a trading warehouses that sought to ensure that Zimbabwean products were always available in Zambia. This was done to countenance the emerging South Africa hegemony on the Zambia economy which saw several shopping centres built by Old Mutual South Africa to house South African retail chains such as Shoprite, Game and many others.
The Zimbabwe Trading House, which was operated jointly with a Zambian company, Sulmach Limited, closed prematurely when then Zambian President Levy Mwanawasa slapped a ban on number of Zimbabwean products.
The Financial Gazette of 16 October 2003 reported that “An ambitious bonded warehouse project established in Zambia about two years ago has collapsed on the back of a ban imposed on Zimbabwean products by President Levy Mwanawasa’s government.
“The ban, which was reserved on certain products, had the effect of cutting off supplies into the warehouse – Zambia Trading House (ZTH) – established by ZimTrade to improve dwindling foreign exchange receipts.”
When Hillary Clinton, the former USA Secretary of State, met Michael Sata on 11 June 2011, Zimbabwe was not topical in their discussions. The Siamese twin did not make efforts to lobby for the removal of economic sanctions illegally imposed on the other twin who gives passage of goods from the sea to the other Siamese twin.
Zimbabwe is learning the hard way that it is important to retain  former maize output status that saw us exporting excess production. Zambians cannot be counted as our allies but a neighbour who happened to be there by virtue of geography. Many Zimbabwean businesses have tried to open and run businesses in Zambia but found the environment harsh for them.  Let’s till the land seriously this season and grow our own food because we are on our own.