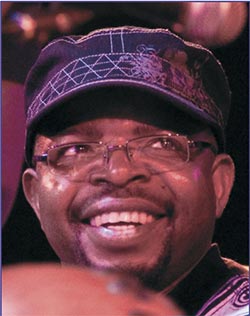 THE captivating sounds of marimba music promise to be twice as nice on Memorial Day Weekend in the US, as one of Zimbabwe’s most acclaimed mbira players shares the spotlight with the San Juans’ own Katura Marimba at the end of the month.
Born into a family of noted mbira players, Musekiwa Chingodza began playing mbira at the age of five and considers the instrument and its music as more than simply entertainment.
It’s nourishment for the soul.
“Our music is both medicine and food, as mbira has the power to heal and to provide for people,” Chingodza said. “Mbira pleases both the living and the dead.”
A noted singer, dancer and drummer, Chingodza performed with Panjea, a key member of the band founded by Chris Berry.
He taught mbira at Harare’s Prince Edward School and is much-sought after for ceremonies in Zimbabwe.
Considered by many to be one of the greatest living mbira musicians, Chingodza is a regular visitor to the U.S., with travel and performances sponsored biennially by the Kutsinhira Cultural Arts Centre in Eugene, Oregon.
With a repertoire featuring traditional Zimbabwean tunes, as well as original compositions and arrangements, Katura Marimba has performed regularly in the San Juans for more than a decade.
The inter-island marimba band features eight musicians performing on a full consort of marimba instruments, soprano to bass.Advertisement