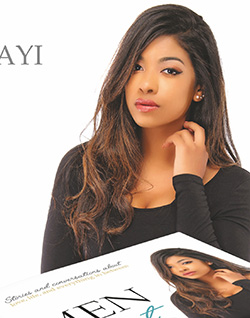 ZIMBABWEAN, and two-time Amazon Bestselling author, Kwapi Vengesayi, is a skilled and gifted writer.
He keeps you enthralled through his captivating musings, motivating stories and thought-provoking conversations about those nagging and eternal topics concerning love, relationships, life and our human experiences.
Accompanied by guest writers, his latest offering – Men Cheat More, Women Cheat Better: Stories and Conversations About Love, Life and Everything in Between – makes for an engaging read that is as witty, candid and enlightening as the books before it, albeit with more diverse voices and unique perspectives.

“Love intrigues us, life consumes us, and everything in between just adds to the chaos,” Kwapi once wrote; a comment that captures the recurring themes in his books as well as the essence of his writing and this new collection of stories and conversations.

Kwapi’s former two releases: Hashtags: The Dumbest, Smartest, Funniest, Deepest Things I’ve Ever (and never) Said About Love, Politics, and Everything in Between (2013) and Love is Work: Hashtags About Love, Life and Everything in Between (2014) became Amazon bestsellers and were applauded by his readership.
Men Cheat More, Women Cheat Better is yet another installation that undoubtedly has the potential to become another bestseller.

The book will be available January 31, 2017 on Amazon, Amazon Europe and Amazon Kindle in both paperback.
According to his website, Vengesayi studied architecture and sociology at the University of Idaho.
He is a social entrepreneur, speaker, Amazon bestselling author, and creator and executive producer of the regionally acclaimed and award-winning social commentary performing arts showcase, the Shades of Black Show.
Vengesayi has worked with singer/songwriters that have gone on to sign to major record labels, dancers that have toured with major artists such as Ariana Grande and productions such as the Marvel Universe Tour, and more.
In 2015 he gave a TEDx Talk titled “The Art of Activistic Entertainment” and is currently the Community Engagement Specialist for a nationally renowned theatre organisation that has produced nine musicals (including the sensational Disney hit Aladdin) that have moved on to Broadway premieres, earning a combined 15 Tony Awards®, including two for Best Musical (Hairspray and Memphis).Advertisement

Kwapi has received numerous awards of the years for his work and programs including the 2016 Zimbabwe Achievers Awards Outstanding Achievement: Entertainment, the 2016 Student Entertainment Board Program of The Year at Washington State University and the 2015 National Association of Campus Activities (NACA) West Region Outstanding Multicultural Program of the Year for the regionally acclaimed Shades of Black Show.
To keep up to date with the author’s work, vvisit:www.kwapiv.com, connect with him on Facebook@kwapivengesayi or follow him onTwitter @kwapiv.