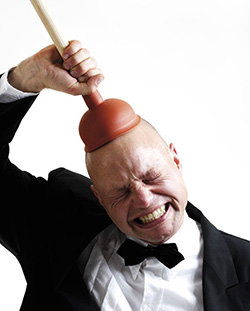 MEN tend to take more risks than women do, and they also seem to be ahead of women in engaging in risky behaviour that is extremely “idiotic,” according to researchers who revealed in a new study that the majority of the receivers of a Darwin Award are men.
To win a Darwin Award, a darkly humorous honour that has existed for more than 20 years, a person must die in “an extraordinarily idiotic manner,” and thereby protect the human gene pool and improve the species’ chances of long-term survival.
For example, one person in the new study was a “terrorist who posted a letter bomb with insufficient postage stamps and who, on its return, unthinkingly opened his own letter,” the researchers wrote.
In a special Christmas issue of the BMJ (a light-hearted edition of the medical journal that normally publishes serious research), researchers in the United Kingdom used the Darwin Award database to examine an idea they call “male idiot theory,” to see whether men’s generally higher inclination for risk-taking extends to taking “idiotic risks.” [Macho Man: 10 Wild Facts About His Body].
The researchers reviewed the stories of all nominees for the Darwin Award from 1995 to 2014, noting the gender of the winner. To win a Darwin Award, the story of how the death happened must be verifiable, and the person must have been capable of sound judgment, while showing “an astonishing misapplication of common sense.”
The researchers looked at 332 cases confirmed by the Darwin Awards Committee to be true incidents. For their analysis, they excluded 14 cases of deaths of adventurous couples, leaving them with 318 cases.
Of those, just 36 were women. The other 282 winners, or 88.7 percent, were men, the researchers found.
The findings support the researchers’ theory that “men are idiots, and idiots do stupid things,” they said.
The theory could also explain some of the gender gap previous studies have found in risk-seeking behaviours, emergency department visits and mortality, the researchers said.
Men are more likely than women to be admitted to an emergency department after accidental injuries or with a sport injury and they are more likely to die in traffic accidents.
Men may be more likely to play riskier sports or have dangerous occupations, but they might also do more stupid things, according to the study.Advertisement

Still, it is also possible that the makeup of Darwin Award winners is biased toward men because cases involving women may not get reported as often.
In addition, alcohol use and its effects may be different among men and women and could potentially impact how many of each group will end up in an event leading to a Darwin Award, the researchers added.