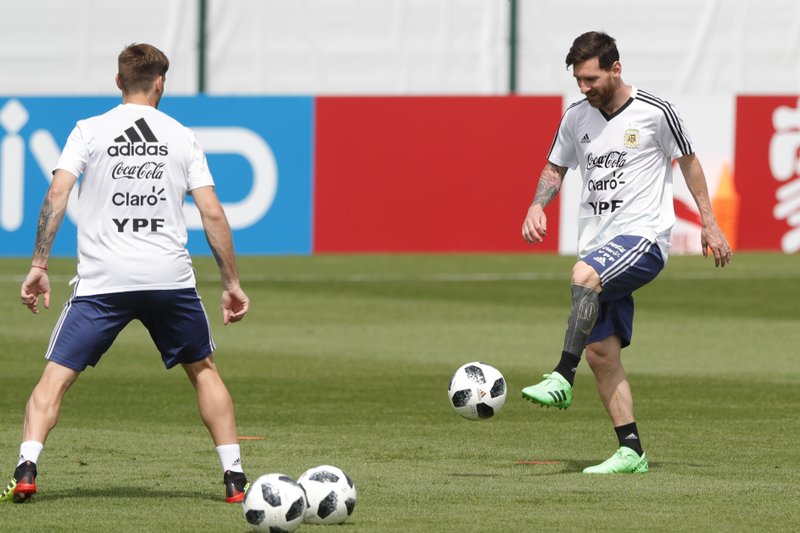 RUSSIA: In any other context, the gesture would have gone unnoticed: Lionel Messi received birthday greetings from Argentina coach Jorge Sampaoli.

The best wishes, however, came amid turmoil embroiling Sampaoli and the squad, which is on the brink of elimination from the World Cup in Russia.

The captain, who turned 31 on Sunday, arrived to the training field where Sampaoli was waiting to start the session. The coach went up to Messi, giving him a kiss on the cheek and a pat on the back. But then there was no further contact between the two.

Argentina’s football association was quick to deny media reports about the future of Sampaoli, who was strongly criticized for his tactical approach and the formation he put out in Argentina’s humiliating 3-0 loss to Croatia on Thursday.

The reports said that Sampaoli would be dismissed and wouldn’t take charge against Nigeria on Tuesday in St. Petersburg for the team’s last Group D match.

Despite palpable tension between the players and the coach, Argentina’s football association president Claudio Tapia indicated Sunday that Sampaoli isn’t going anywhere yet. But he didn’t clarify what would happen afterward since Sampaoli has a contract that runs through the 2022 World Cup in Qatar.

“You have seen the coach and the team training,” Tapia told reporters. “It’s clear that what you are saying is a lie.” Tapia didn’t respond to questions.

After the defeat to Croatia, forward Sergio Aguero responded to a reporter’s question asking him about Sampaoli’s post-match comments that the players hadn’t adapted to his methods. Aguero, who is Messi’s roommate at the training base, responded: “Sampaoli can say what he wants.”

So far, this tournament has been a huge disappointment for Messi and Argentina, which finished as runner-up at the 2014 World Cup. The five-time world player of the year missed a penalty against Iceland in the first group game and played one of his worst matches against Croatia.

If there isn’t a party going on at the moment within Argentina’s training base in Bronnitsy, a town outside Moscow, there was certainly one happening outside.

Bronnitsy’s mayor invited hundreds of people from the area to a symbolic birthday celebration for Messi. There was a huge life-size cake of the star, replete with detail including his tattoos, and typical Russian dance and folk songs. The party-goers devoured the chocolate and strawberry cake, hardly leaving a crumb.

Perhaps news of the gala in Messi’s honour will lift his spirits for what really counts: beating Nigeria.