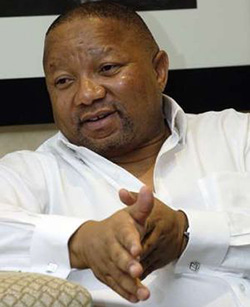 ZIMBABWE-FOCUSSED London-based gold miner Metallon Corporation is implementing a five-year strategy to become a mid-tier gold producer of 200 000 oz of gold a year by 2016, says Metallon CEO and deputy chairperson Mzi Khumalo.
He told Mining Weekly that the strategy involves reducing costs, increasing production at the company’s four mines, developing a fifth mine – Redwing mine – expanding exploration projects and strengthening relations with all relevant stakeholders.
“We have prioritised working closely with all the parastatals in Zimbabwe, which . . . ensures that we find swift solutions to any challenges associated with mining in Zimbabwe,” says Khumalo.
Mining, as with any other business in Zimbabwe, is currently dominated by regulatory uncertainty, specifically with regard to the indigenisation policy, which stipulates that 51% of the country’s minerals belong to previously disadvantaged Zimbabweans. This means that investors can only hold a 49% share.
The regulation has led to reduced investment in the country’s mineral resources.
However, Khumalo despite these challenges, Metallon has reduced costs and was able to recover from the 2008 global recession, which significantly affected Zimbabwe.
He added that there are several political issues in Zimbabwe that remain unresolved, subsequently creating the negative perception among investors that it is a difficult place in which to work.
“But with the labour disputes and the difficulty of having to mine deeper currently facing South Africa, mining in Zimbabwe has become a walk in [the] park. Metallon is proof that it can be done – that the country is a good investment destination in Southern Africa,” states Khumalo.
About Metallon
Metallon has been operating in Zimbabwe since 2002. It owns and operates four mines in the country, including How mine, outside Bulawayo; and the Shamva, Mazowe and Arcturus mines, all outside the capital Harare.
Metallon is also dewatering Redwing mine, near Mutare, and exploring at the Motapa and Midwinter projects. The company produced 82,000 oz of gold in 2013 and aims to produce 100,000 oz this year.
Khumalo, a South African businessperson who co-founded Metallon in 2002, believes that, with Zimbabwe’s infrastructure, the country should be the destination of choice for potential investors.Advertisement

He maintains that Zimbabwe’s infrastructure is better developed than, for instance, that of the Democratic Republic of Congo (DRC), which has attracted the interest of several investors in recent years.
“Zimbabwe has one of the best infrastructure settings in sub-Saharan Africa. While energy and water are a big problem in the mining industry, Zimbabwe has that in relatively good supply,” Khumalo explained.
He stated that, as part of Metallon’s strategy to become a mid-tier miner, the company has an agreement with a Zimbabwe power utility to pay for electricity in advance.
Khumalo said it was possible to operate profitably despite the country’s indigenisation policy.
Further, Metallon has prioritised community development. Over the years, the company has helped to build schools and clinics for surrounding communities, which has earned the company credit towards its indigenisation quota.
“Mining is an opportunistic business; you mine where there are rich mineral resources. Zimbabwe has large, rich reserves that have not yet been explored properly. Metallon has found and invested in very rich resources and reserves.”
Meanwhile, Khumalo noteed that government’s 2012 agreement, allowing mining companies to sell their processed minerals at market value using the US dollar instead of the Zimbabwean dollar, is one of the highlights in Zimbabwe’s recent mining history,
Metallon’s Zim Operations
Metallon’s flagship mining operation is How mine, which was acquired from mining major Lonmin in 2002 as part of five mines that also included Shamva, Mazowe, Arcturus and the Redwing development project. The mine has been an underground asset since 1942.
How mine has a central processing facility, which uses a combination of conventional milling and carbon-in-leach (CIL) processing. It has a Joint Ore Reserves Committee- (Jorc-) compliant resource of 1.7-million ounces of gold.
In 2013, How mine contributed half of Metallon’s production output, with 40 300 oz. It has a targeted production rate of 52 000 oz for 2014. The mine produced at an all-in cost of $650/oz in 2013 and has a targeted cost of $625/oz this year.
Shamva mine, also an underground mine, has been in production since 1893 and has produced 2.4-million ounces of gold to date. The mine’s ore is processed through conventional crushing, milling, gravity recovery and a combination of carbon-in-solution and carbon-in-pulp processing.
Meanwhile, Metallon’s Mazowe mine has been in production since 1980. It has two underground operations, with conventional crushing, milling, free gold recovery and CIL facilities.
Its current Jorc-compliant resource is 1.3-million ounces of gold. Production in 2013 was 10 400 oz, while this year’s target is 12 000 oz at $1 100/oz.
The company’s Arcturus mine, which has a Jorc-compliant resource of one-million ounces of gold, started production in 1907 and was placed on care and maintenance in 2008. Production started again in October last year.
In 2013, Arcturus produced 8 200 oz of gold and is forecast to produce 12 000 oz this year at a targeted all-in cost of $ 1 150/oz.
Metallon is also dewatering Redwing mine with exploration and development in place to bring the mine back to a 30 000 oz/y capacity. The dewatering is scheduled for completion this year with production to commence in 2015.