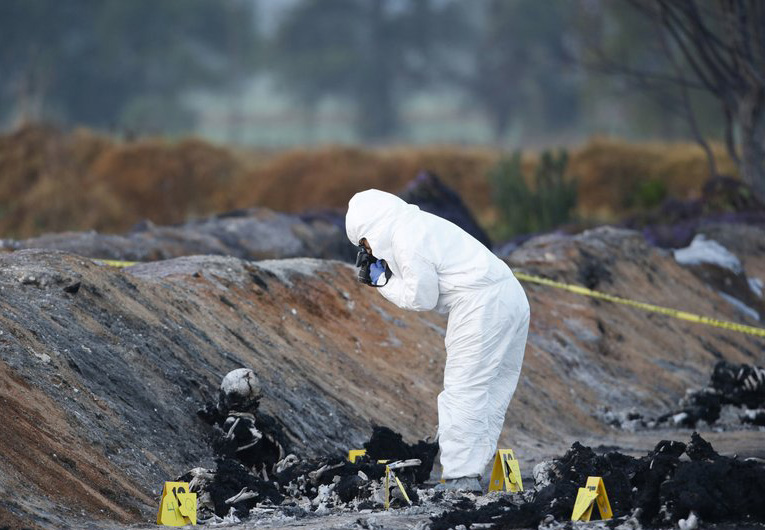 Gerardo Perez returned Saturday to the scorched field in central Mexico where he’d seen an illegal pipeline tap burst into flames to see if he could recognise missing friends. He couldn’t. Only a handful of the remains still had skin. Dozens were burned to the bone or to ash when the gusher of gasoline exploded, killing at least 73 people.

Perez said he and his son bypassed soldiers and ignored warnings to stay clear of the geyser Friday evening in the town of Tlahuelilpan in Hidalgo state, about 100 kilometres north of Mexico City.

“We’re stubborn,” he said. But as Perez neared the spurting fuel, he was overcome with foreboding. He recalls telling his son: “Let’s go … this thing is going to explode.”

And it did, with the fireball engulfing locals collecting the spilling gasoline in buckets, jugs and garbage cans. Video footage showed flames shooting high into the night sky, and screaming people running from the explosion, some themselves burning and waving their arms. Perez and his son made it out.

By Saturday evening the death toll had risen to 73, according to Hidalgo Gov. Omar Fayad. Officials said at least another 74 were injured and dozens more were missing. Fifty-four bodies have yet to be identified.

Forensic experts were separating and counting charred heaps of corpses while anguished relatives of those presumed dead gathered around the scene of carnage.

Just a few feet from where the pipeline passed through an alfalfa field, the dead seem to have fallen in heaps, perhaps as they stumbled over each other or tried to help one another as the geyser of gasoline turned to flames.

Several of the deceased lay on their backs, their arms stretched out in agony. Some seemed to have covered their chests in a last attempt to protect themselves from the blast. A few corpses seemed to embrace each other in death. Lost shoes were scattered around a space the size of a soccer field, as were half-melted plastic jugs the victims carried to gather spilling fuel. Closer to the explosion, forensic workers marked mounds of ash with numbers.

On Friday, hundreds of people had gathered in an almost festive atmosphere in a field where a duct had been perforated by fuel thieves and gasoline spewed 20 feet into the air.

State oil company Petroleos Mexicanos, or Pemex, said the pipeline, which supplies much of central Mexico with fuel, had just reopened after being shut since Dec. 23 and that it had been breached 10 times over three months.

The tragedy came just three weeks after President Andres Manuel Lopez Obrador launched an offensive against fuel theft gangs that have drilled dangerous, illegal taps into pipelines an astounding 12,581 times in the first 10 months of 2018, an average of about 42 per day. The crackdown has led to widespread fuel shortages at gas stations throughout the country as Pemex deviates distribution, both licit and illicit.

Lopez Obrador vowed on Saturday to continue the fight against a practice that steals about $3 billion per year in fuel.

“We are going to eradicate that which not only causes material damages, it is not only what the nation loses by this illegal trade, this black market of fuel, but the risk, the danger, the loss of human lives,” he said.

He said the attorney general’s office will investigate whether the explosion was intentional — caused by an individual or group — or whether the fireball occurred due to the inherent risk of clandestine fuel extraction. He called on townspeople to give testimony not only about Friday’s events in Hidalgo, but about the entire black-market chain of fuel theft.

“I believe in the people, I trust in the people, and I know that with these painful, regrettable lessons, the people will also distance themselves from these practices,” he said.

Lopez Obrador faces an uphill fight against a practice that locals say is deeply rooted in the poor rural areas where pipelines pass, covered by only a foot or two of dirt. Specialised fuel thieves who tap the lines usually cart their bounty off in trucks. But in recent days, as the government cracks down on fuel theft rings, the gangs have punctured pipelines and invited locals to help themselves.

Tlahuelilpan, population 20,000, is just 13 kilometres from Pemex’s Tula refinery. Pemex Chief Executive Octavio Romero said an estimated 10,000 barrels of premium gasoline were rushing through the pipeline with 20 kilograms of pressure when it was ruptured.

Locals on Saturday expressed both sympathy and consternation toward the president’s war on fuel gangs.

Arely Calva Martinez said the recent shortages at gas stations raised the temptation to salvage fuel from the gusher.

Her brother Marco Alfredo, a teacher, was desperate for gas to drive 90 minutes back and forth to work when word spread via Facebook that fuel spewing into the field. Marco Alfredo and another brother, Yonathan, were in the field when the fire erupted. They haven’t been seen since.

“I think if there had been gas in the gas stations, many of these people wouldn’t have been here,” Calva Martinez said while holding a picture of her brothers.

Tears streamed down Erica Bautista’s cheeks as she held up her cellphone with pictures of her brother, Valentin Hernandez Cornejo, 24, a taxi driver, and his wife, Yesica, both of whom are also missing. Valentin faced “enormous lines” for a limited ration of gas, she said. Then he received a phone call alerting him to the fuel spill.

“We want to at least find a cadaver,” she said while weeping.

Health officials were taking DNA samples from direct relatives at the local community centre in Tlahuelilpan to aid in identification. Outside, a long, chilling list of the missing was taped to a window.

Wrapped in a blanket, Hugo Olvera Estrada said he had gone to six nearby hospitals looking for his 13-year-old son, who had joined the crowd at the fuel spill. He hasn’t been seen since.

Mexican Defense Secretary Luis Cresencio said Saturday there are 50 soldiers stationed every 12 miles along the pipelines, and that they patrol 24 hours a day. But the soldiers have been ordered not to engage with fuel thieves out of fear that an escalation could result in more shootings of unarmed civilians or more soldiers being beaten by a mob.

“We don’t want this sort of confrontation,” Cresencio said.

Officials say 25 military personnel arrived on the scene soon after the pipeline started spewing fuel on Friday. Over the course of two hours, hundreds of civilians came to fill containers with gasoline from a gusher shooting six metres into the air.

A second pipeline burst into flames Friday in the neighbouring state of Queretaro as a result of another illegal tap. But in this fire there were no reported casualties.

In December 2010, authorities also blamed oil thieves for a pipeline explosion in a central Mexico near the capital that killed 28 people, including 13 children. That blast burned people and scorched homes, affecting 5,000 residents in an area 10 kilometres wide in San Martin Texmelucan.