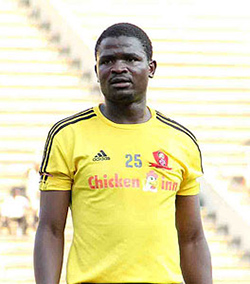 CHICKEN Inn defender Lawrence Mhlanga has approached the Footballers’ Union of Zimbabwe, to help him with his move to Platinum FC.
The defender hasn’t reported for training with the former league champions and was reported to have signed with Platinum, a move which Chicken Inn cancelled when they said the player has a running contract with them.
Mhlanga has now approached FUZ to help him clear the matter, so that he can join the team of his choice.
FUZ Chairman Desmond Maringwa, who has since met with Chicken Inn Officials on the matter and said that they hope to find a solution to solve the problem.
“Yes we are looking into the matter and we hope that all will be solved, for the good of the game. We have heard both parties and now the right decision has to be taken, for the good of the game,” Maringwa concluded.Advertisement