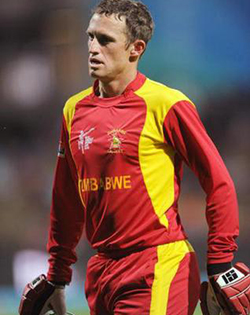 MIDWEST Rhinos captain Sean Williams has been found guilty of breach of conduct and suspended for three games of Zimbabwe’s domestic Twenty20 competition for allegedly threatening an umpire and his family during a game in Bulawayo on Wednesday.
Williams, the 29-year-old Zimbabwe international, is accused of throwing tantrums at umpire Owen Chirombe at Bulawayo Athletic Club during his side’s match against Mountaineers upon being advised he was two minutes behind with his team’s overrate.
The charge sheet by match referee Emmanuel Dube reported that Williams, in over 7.3 of the game, “abused, intimidated and threatened” Chirombe before going on to threaten the umpire and his family.
“You are useless,” the charge sheet quotes Williams as saying. “F**k you, it’s personal you and me. I’m fixing you this time, I’m taking you to court. I’m sick and tired with this sh**t umpire. He has a record of 99 percent errors. Useless c**t.”
Match referee Dube added that Williams also showed “total disrespect” to him by dumping the charge sheet at his desk before the hearing, shouting: “I’m going to appeal this!”
In his defence, Williams denied making the utterances, admitting he only told Chirombe to “f**k off” in frustration.
Dube, however, reduced the match ban to two games if Williams paid a fine of $150 before toss for Wednesday’s afternoon game.Advertisement