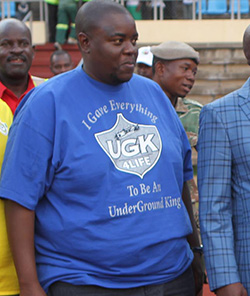 I WAS very disappointed to read this article yesterday in the Sunday Mail suggesting I have failed to honor my commitment to pay the coach’s salary. With the greatest respect this foolish and overzealous reporter needs psychiatric attention.
I run multi-million dollar businesses and I don’t work for ZIFA so if nothing has been communicated to me I’m not supposed to guess, speculate or conjecture. It must be noted ZIFA has no bank account and owes creditors 6 million dollars. So many people have writs of execution to attach property or money identified as belonging to ZIFA.
To ensure players get their money you have to be extremely circumspect and discreet otherwise the money will be intercepted and forfeited. My vision was simply to turn around football all in the interest of the nation. I had to reduce my holidays from one every 2 months to one every 4 months.
From the 1 million dollars I committed as sponsorship to date I have parted with 478 thousand dollars and above that Pasuwa’s car cost me 69 thousand dollars Mlauzi’s 41 thousand. Simple calculations show almost 600 thousand dollars used in 3 months as opposed to the agreed 3 years. If I say I have given players 72 thousand dollars and 28 phones you must know that’s nothing but the truth.

My reputation in retrospect speaks for itself. Always remember I’m under no obligation whatsoever to support soccer.  Pasuwa came to my office last week and I assured him I was unaware he wasn’t being paid but I insisted and showed him evidence of various payments I made on behalf of ZIFA not knowing the issue of his salary had not been taken care of.
I gave him 3000 dollars FOR LUNCH and told him I would open an escrow account with BANK ABC this week where I would subsequently deposit his salary for one year and he would earn monthly as stipulated by his contract.
The basis of that Sunday article was to give an impression that I have failed to pay him or I have given ZIFA the money and they have not paid him. None of the above is correct and it must further be noted that Pasuwa is not the only headache ZIFA has so for him to go to the press and start telling them about his daughter and his rental issues in Greendale before telling me or waiting for me to resolve the issue is gross disrespect.Advertisement

Such behavior displays an ungrateful person and is totally unacceptable in my world. He drives a brand new TOYOTA that I bought, a car that I see being driven only by executives. I can afford to pay him 7000 dollars every day for the next 10 years and still not feel it. As soccer supporters, journalists must also all remember I’m doing something NO ZIMBABWEAN has ever done since independence so the least I expect is appreciation.
Most of you broke idiots sit around in corners assuming that I did this for the publicity…HELL NO…who would be so stupid to spend 600 thousand dollars for mere publicity. I’m in the paper for signing massive deals often and that’s good enough publicity, save to say this page, instagram, snap chat and my twitter account.
I’m doing this out of the goodness of my heart to support the nation. How many of you have ever seen what 10 thousand dollars looks like in real life now imagine 600 thousand dollars in these tough times. If anything sponsoring soccer has in fact caused me more headaches than joy…
THE TAX MAN came chasing after me and did a fictitious nonsensical lifestyle audit and demanded 1.4 million dollars. I’m not afraid because God looks after me at all times. I’ve made it very clear before that I can never ever intimidated for supporting national programs. I’m a citizen of this country and I’m equally protected by the constitution so the law will take its course.
I make my own money and I spend it how I like NO APOLOGIES….For as long as they have no power to GARNISH my life they can surely GO TO HELL ever since I made it here I know I can make it anywhere…To cut a long story short THIS OFFICIALLY MARKS THE END of my sponsorship for the WARRIORS for 2016.
It takes a lot of love to spend 600 thousand dollars on people you don’t know or are not even related to; so you will all appreciate my reasons for reacting this way in the circumstances. I can’t tolerate ungrateful people and I will never take this type of rubbish in my life.
It’s a different thing if I wasn’t paying their bills and giving them money immediately upon request. However having said that as a gesture and as a level headed person I will go ahead and set up the escrow account today and make sure PASUWA’S one year salary is secured…. Other than that for now I will also give others a chance to support NATIONAL PRIDE…..GO WARRIORS GO….ALL THE BEST TO AFCON…..