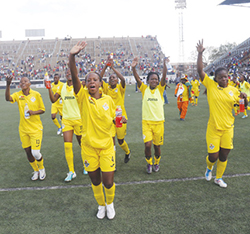 THE Mighty Warriors kicked off their preparations for November’s Africa Women Nations Cup on a high note, with a 2-1 international friendly match over visiting Egypt at Rufaro Stadium on Tuesday.
First half goals from Maud Mafuruse and Tonderayi Masango carried the day for Zimbabwe, while Egypt got their consolation from Alou Shoukry four minutes into the second half.
Zimbabwe coach Shadreck Mlauzi, fielded an unfamiliar starting XI but still delivered, showing that great lessons were learnt from the Rio Olympic Games last month.
Victory was always coming for the Mighty Warriors who went ahead 15 minutes, into the game when Mafuruse headed in Greater Bande’s cross.
Mlauzi’s ladies threatened to run away with the match although Egypt produced some resilient moments.
But Masango doubled Zimbabwe’s advantage on 27 minutes and the hosts went for halftime leading 2-0.
Egypt quickly responded soon after the restart but, Zimbabwe almost went further ahead only for substitute Kuda Basopo’s goal to be disallowed for offside.
The wholesale introduction of regulars Patience Mujuru, Rutendo Makore, Viola Ndlovu and Sarudzai Chikowore could only see Zimbabwe holding on to their lead.
Interestingly, Zimbabwe have been pooled in Group A together with Egypt at the Women’s Nations Cup.
Hosts Cameroon and South Africa are other Group A members.Advertisement