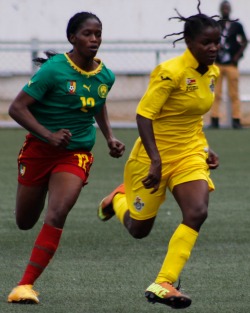 Zimbabwe 1-0 Cameroon (Zimbabwe win on away goals rule after 2-2 aggregate draw)
THE ZIMBABWE women’s football team, the Mighty Warriors, made history on Sunday when they became the first national football team to qualify for the Olympic Games after they edged fancied Cameroon to win on away goals rule.
The Mighty Warriors lost 2-1 in the first leg two weeks back, but won 1-0 on Sunday via a Rudo Neshamba strike after just nine minutes to leave new coach Shadreck Mlauzi on cloud nine.
“I am so, so happy. This was my first time to coach the national team and look: we are going to Rio next year. I can’t express it in words, but I am delighted with these girls.
“They have made Zimbabwe proud, they have made everyone proud and even themselves. They have written their own piece of history and I am so happy.
“When we played the first leg, we led for 62 minutes, we made mistakes and we conceded two goals.

Thank you … Mighty Warriors salute the fans after the win.