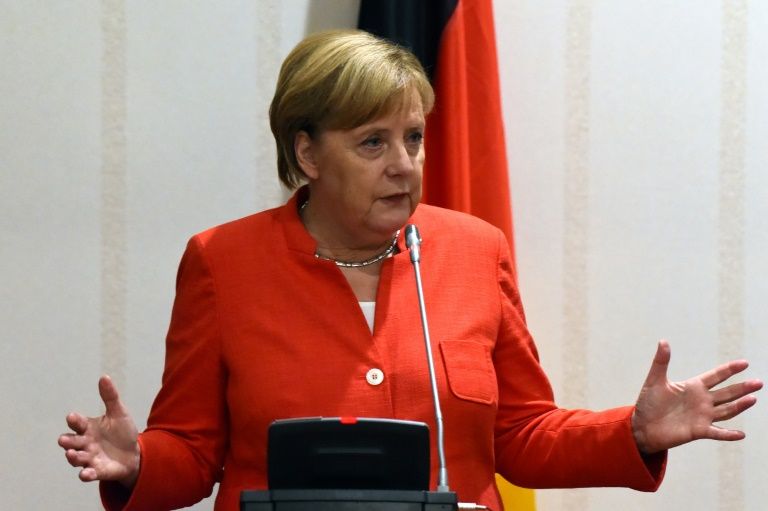 German Chancellor Angela Merkel won praise, then opprobrium with her decision to welcome in hundreds of thousands of asylum seekers, amid rising nationalist sentiment despite falling numbers and some headway made on integration
Spread This News

German Chancellor Angela Merkel won accolades for her stunning call on September 4, 2015 to keep open Germany’s doors to hundreds of thousands of asylum seekers, many fleeing war-torn Syria or Iraq.

Three years on, scenes of far-right protesters chasing down foreigners in a German city have shocked the world.

All of Europe has seen a sea-change since the migration crisis erupted.

Britain is now just months away from quitting the European Union, the far-right is sharing power in both Italy and Austria, while right-wing extremist group AfD has become the biggest opposition party in Germany’s parliament.

If there is a common denominator for these upheavals in European politics, it is the migration crisis seized upon by pro-Brexiters and far-right forces across Europe as the public enemy in their campaigns.

Despite her “we can do it” rally cry, Merkel has since agreed to toughening restrictions to curb new arrivals, while the EU as a bloc is seeking to stop migrants landing on its soil.

As a result, the influx has slowed considerably.

Some headway also appears to have been made on integration.

Demonstrators brandish German flags at a rally organised by the right-wing populist “Pro Chemnitz” movement, the far-right Alternative for Germany (AfD) party and the anti-Islam Pegida movement in Chemnitz, scene of attacks by a racist mob in recent days


One in four asylum seekers who arrived in Germany since 2015 have since found work, according to data released in May by the employment ministry’s think-tank IAB.

“While the numbers of arrivals are down, the hysteria is up, as populist movements and a growing number of mainstream politicians are building their business model on anti-migration sentiments.”

In the most recent illustration of the deep-seated resentment against newcomers, hundreds of mostly white men gathered swiftly in the eastern German city of Chemnitz, some attacking foreign-looking people, after news circulated that a German man was stabbed to death last Sunday, allegedly by an Iraqi and a Syrian.

Across the Atlantic, US President Donald Trump in June also poured fuel on the burning topic: “Big mistake made all over Europe in allowing millions of people in who have so strongly and violently changed their culture!”

‘Fatal solvent of the EU?’

Some analysts warn that not only was Europe’s migration crisis not over, it could yet be the undoing of the EU itself.

Offering a pessimistic reading of the situation, British historian Niall Ferguson wrote: “Far from leading to a fusion, Europe’s migration crisis is leading to fission.”

“Increasingly I believe that the issue of migration will be seen by future historians as the fatal solvent of the EU,” the professor at Harvard predicted.

“In their accounts Brexit will appear as merely an early symptom of the crisis.”

EU member states’ reaction to the refugee influx has been dramatically different to that of the financial crisis, which was marked by countries sacrificing controls over the banking system to save the euro, Lehne noted.

“The response to the recent refugee crisis was just the opposite,” with countries turning instead to national measures.

“This logic of re-nationalisation, combined with the rise of xenophobia and identity politics in many EU countries, now hampers the development of robust collective instruments to deal with migration challenges,” he said.

The migration crisis has also unearthed a key fault-line between western European nations and the former communist bloc, with Hungarian Prime Minister Viktor Orban leading the east in flatly refusing to take in refugees.

“Ten years ago, the biggest problem in Europe was that western Europeans were unhappy about EU expansion as they fear job losses,” said Bulgarian political scientist Ivan Krastev in an interview with Die Welt daily.

“Today, eastern Europeans feel they are the biggest losers.”

But he nevertheless voiced support for Merkel’s fateful decision because leaving frontline nations Italy and Greece alone to deal with the crisis in 2015 “would have been the end of the EU”.

Italy’s Interior Minister Matteo Salvini, addressing a press conference alongside Orban in Milan last week, has accused Europe of abandoning his country, which with neighbouring Greece has borne the brunt of the arrivals in recent years

Ahead of next year’s European parliament elections, the hardline minister has also aligned himself with the right-wing “Visegrad” countries of the Czech Republic, Poland, Austria and Hungary to form an anti-migration camp.

“The appearance of a ‘nationalist international’ will hopefully trigger a counter-mobilisation of pro-European political forces,” said Lehne, noting that this could in turn spark a necessary healthy debate on the future of the EU.

“Such a debate involves risks, as major parts of the public remain alienated from the EU, but it also could turn into a catalyst for positive change. Some storms are necessary to clear the air and provide a better view on what the future holds.”