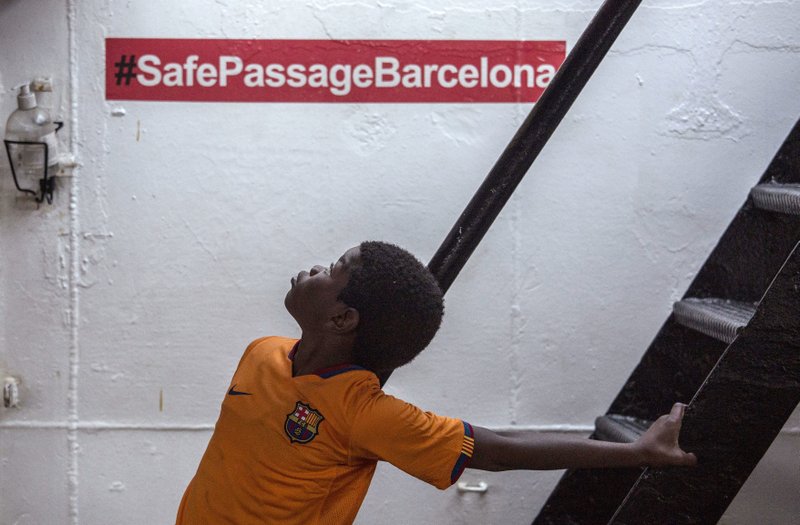 Izzeddin al-Ghalban’s first attempt to reach Europe ended when the boat engine died. The Libyan coast guard thwarted his second. After a third try, the 23-year-old rested on the deck of a Spanish aid group’s rescue ship as it headed toward Barcelona, grateful that he finally made it.

“Libya is hell,” al-Ghalban told The Associated Press on Tuesday aboard the Open Arms, a ship run by charity Proactiva Open Arms.

The young Palestinian from Gaza was one of 60 migrants the crew of the Open Arms rescued Saturday from a rubber boat floating in waters off Libya’s coast, a scenario that’s been repeated over and over on the Mediterranean Sea in recent years.

Such rescues are getting increasingly complicated after Italy’s new government closed its ports to ships like the Open Arms, calling them de facto “taxi services” for human smugglers operating in Libya.

Aid groups deny any links to the smugglers, saying they are trying to save lives amid a human catastrophe. Thousands of people have perished trying to cross the Mediterranean in flimsy vessels since 2015.

After the island nation of Malta also denied the Open Arms authorization to dock, Spain agreed for the second time this summer to receive a ship carrying migrants from the rescue zone off Libya, even though the country is much further away.

“I had seen the Spanish boat in my dreams,” said Judith Widianou, who fled violence in Central African Republic with her partner and their 9-year-old son. “I’m so happy, it’s as if God had come to me.”

Her son was sporting a FC Barcelona soccer shirt, given to him by the crew of the Open Arms.

“If a person leaves his country, it’s because there is danger there,” Widianou said. “Italy must calm its heart and do what it was doing before (rescuing and taking in migrants.) For the love of God.”

On the journey to Spain, some migrants rest while others learn Spanish, writing down basic vocabulary words and phrases in crumpled notebooks.

The ship is set to arrive in Barcelona on Wednesday. The migrants will get 45 days to apply for asylum in Spain or other countries in the European Union. Many have relatives in Germany, Belgium and France.

Honoree Bitcha said he hoped to be granted refugee status in Spain.

The 39-year-old left his native Cameroon in 2014 to look for work. He said his parents died when he was young, leaving him and five younger siblings to fend for themselves.

Like many migrants who end up in Libya while making their way toward Europe, Bitcha said he was enslaved and tortured by criminal gangs that demanded money.

With tears running down his cheeks, Bitcha went down on his knees to demonstrate how his captors whipped him while forcing him to speak to his brother on a cellphone. They wanted his brother to hear his screams after each lash, Bitcha said. The torture continued until his brother could pay his ransom in full, he said.

No wonder his brother was overjoyed when Bitcha called him from the Open Arms on a phone he borrowed from a crew member.

“My only hope is that Spain lets me stay. I count on that,” Bitcha said. “Because if they let me go, I don’t know what I’ll do with my life.”