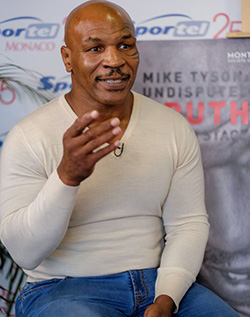 FORMER heavyweight champion Mike Tyson was sexually abused when he was seven years old by a stranger on the street, he told US radio.
The 48-year-old former boxer said an adult male grabbed him.
“He bullied me, sexually abused me and stuff… snatched me off the street. I was a little kid,” he told Sirius XM Radio.
Tyson said he never saw the man again and never reported the incident to his parents or the police.
“It was nobody’s business to know,” he said, during an interview to promote his new TV show. “I just lived my life.”
Tyson did not elaborate on what effect the abuse had on him, and said he does not feel any shame about what happened.
“I don’t always remember, maybe I do but I don’t. I’m not embarrassed or ashamed from that perspective,” he said.
Tyson made history in 1986 when at age 20 he became the youngest boxer ever to hold a world heavyweight title.
The legendary boxer won 50 out of 58 matches during his illustrious career, including 44 by knockout.
He has also made headlines for scandals, notably in 1992, when he was convicted for the rape of a teenage beauty queen.
He served three years of a six-year sentence.
Later, in 1997, he bit a chunk out of opponent Evander Holyfield’s ear.
He also has convictions for assault, cocaine possession and driving under the influence.Advertisement