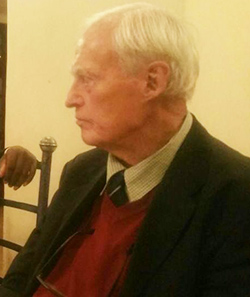 ZIMBABWEAN sports and education are all far poorer following the passing on Boxing Day of Mike Whiley, a steadfast and dedicated servant to his country throughout his entire life.
In sporting terms, Mike Whiley was a lot of things at the peak of his health: in rugby he was for many decades Zimbabwe’s finest referee by a distance, a much-adored godfather of rugby refereeing in the country, enthusiastic junior coach and one-time executive committee member of the Zimbabwe Rugby Union (ZRU).
As a cricket man, Whiley – who died in Harare on Monday at the age of 84 – was a stalwart of development and junior cricket within and outside the structures of the national association.
A short seven-minute Australian-produced documentary from 1995 featuring a then 12-year-old prodigy from Harare’s black township of Highfield, Stuart Matsikenyeri, and mentor Whiley, bears full testimony to what the great man loved doing and lived for – coaching and imparting knowledge to all Zimbabweans regardless of their background.
The documentary, which still appears on You Tube, contains opening remarks from the iconic Australia spin wizard Shane Warne, Matsikenyeri (later to play eight Tests and 113 ODIs for Zimbabwe) getting tips from the former Aussie batsman David Boon in the Harare Sports Club nets and a visibly proud Whiley showering the little boy with praise in an interview with the reporter Adam Shand.
Also an educationist who served in different capacities with enormous distinction for 46 years, Whiley was headmaster of Ellis Robins Boys High and Plumtree School when both schools enjoyed their best years in history.
Known fondly by his nickname, Spike, I presume due to the tall and gangly features that stayed with him until old age, Whiley will always be remembered as a larger-than-life character.
In his schoolmaster days, it’s said he could charge like a bull when occasions called for it, yet still managing to draw from pupils not fear – but respect.
“When I got to Plumtree in `94, I was shocked by the prevailing culture,” says former national rugby player and a current ZRU vice-president Tapiwa Mangezi.
“It was hard as a new boy. Spike had left the year before, but his influence still existed through the senior boys I found there.
“I learnt that Spike encouraged an environment that that put students through trials. The system forced you to give your best. Excuses were not tolerated. Excellence was the norm.”Advertisement