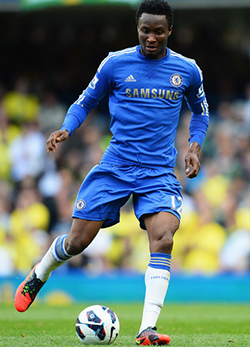 Mikel John Obi is very likely on his way to France to team up with Olympique Marseille according to Super Eagles coach, Gernot Rohr.
Mikel has struggled to break into the Chelsea first team this season, failing to make a competitive appearance for the Blues under new manager, Antonio Conte.
Mikel joined Chelsea in 2006, making over 350 appearances for the club, but he has yet to feature for the Premier League leaders in all competitions this season.
The 29-year-old is now expected to be let go by the Premier League leaders and is seemingly on the verge of a move to France.
“I saw Obi Mikel in London.
“He is in advanced discussions with Olympique Marseille.
“He will leave Chelsea for free. This is a serious option,” Rohr was quoted as saying to Europe 1.
Mikel’s contract at Stamford Bridge is set to expire at the end of the season.
The Nigeria international midfielder is Chelsea’s second longest-serving player behind club captain, John Terry.Advertisement