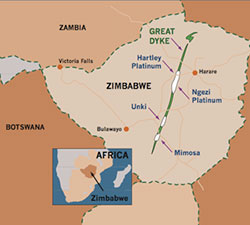 MIMOSA Mine’s output declined by four percent to 58,019 ounces in the three months to December compared to the year before but the miner drove down costs to counter weak prices which fell to their lowest in a decade during the quarter.
The Bermuda registered Aquarius Platinum, which owns Mimosa in a 50: 50 a joint venture with Implats of South Africa, said average platinum group metals (PGM) prices at $818/oz were 26 percent lower than $1,111/oz for the corresponding period in 2014, impacting revenue.
In the preceding quarter to September, PGM prices averaged eight percent higher at $890. But mining cash costs per PGM ounce at $772, were three percent lower quarter-on-quarter.
“Mimosa mine operated very well during the quarter, with cordial industrial relations and meeting most of its production targets,” said Aquarius in a trading update.
“In response to the sharply lower metal prices, Mimosa implemented a number of significant cost cutting initiatives during the quarter which will result in operating costs reducing significantly in H2.”
Revenue dropped by 13 percent to $46 million from $53 million in the previous quarter but gross cash profit margin for the period rose from four to seven percent.
Aquarius said on a quarterly comparison, PGM output decreased by seven percent. Ore production increased marginally to 656,844 tonnes, quarter-on-quarter  while head grade fell one percent to 3.63 grammes per tonne.
Recoveries were consistent at 78.6 although volumes processed decreased by five to 638,652 tonnes.
Total capital expenditure for the second quarter amounted to $10.8 million.
Aquarius noted that the proposal to render royalties payable by Mimosa non-deductible for income tax purposes — which was implemented with effect from 2014 — had cost the miner $1,7 million.
The company is negotiating  with the Zimbabwean authorities to make royalties deductible for income tax purposes.
Aquarius, which expects the purchase of its assets by Sibanye Gold to be completed in April after its shareholders approved the transaction on January 18, said was working to fulfil the remaining conditions of the agreement.Advertisement