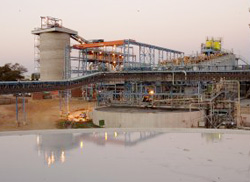 ZIMBABWE’S second largest platinum producer Mimosa says it has spent $5,5 million to retrench about 100 workers, resulting in a slight increase in cash costs for the year ending June 30.
Mimosa is a 50:50 joint venture between South African mining firms, Impala Platinum, the world’s second largest platinum miner and Aquarius Mining.
Aquarius, in its year-end financials, did not specify the number of retrenched workers but reports last year indicated that it wanted to cut 100 jobs through a voluntary retrenchment exercise to reduce operational costs in the face of unpredictable platinum prices.
The mine then employed about 1,500 full-time and nearly 200 contract workers.
“In Zimbabwe the cash cost per PGM (platinum group metals) ounce was $878, a one percent increase inclusive of completing a voluntary labour rationalisation programme at a one-off cost of $5,5 million.
“Operating costs were well within inflationary targets and will continue to be a point of focus particularly in the ongoing low metal price,” the company said.
The financial statement was a follow-up to the publication of the group’s preliminary financial results in August.
Revenue at Mimosa during the year went down by 2.2 percent to $130,5 million compared to $133,4 million in the prior period. Net profit fell 18,2 percent to $19,3 million from $23,5 million in 2014.Advertisement