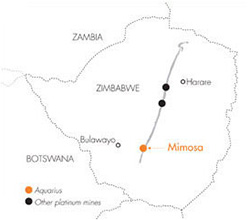 SOUTH African platinum miner Aquarius says its Mimosa operation in Zvishavane is too small to sustain its own refining facility but would work with other mines over time to put one in place.
Zimbabwe’s cash-strapped government has recently moved to effect a tax on unrefined platinum, first proposed in 2013 in an effort to push mining companies to process the metal domestically – a move platinum miners say could cripple their operations.
This is despite indications made late last year, that government would postpone the tax until January 2017 to give miners time to build the smelting and refining plants.
But the Finance Bill, which was published on January 9, proposed its introduction from January 1 2015 citing lack of progress towards the construction of in-country refinery infrastructure by the platinum industry.
Mimosa is jointly owned by South African miners, Aquarius Platinum and Impala Platinum, the number two largest platinum producer in the world.
Zimbabwe has the world’s second largest platinum reserves but sends raw minerals to neighbouring South Africa for processing.
“Mimosa’s stated position is that it is too small to establish smelting/refining capacity stand alone, but has committed to work with the other mines to establish smelting capacity over time,” the company said in the financial results for the six months to December 31.
Zimplats is on course to re-commission its base metals refinery by 2016, but it would have capacity to cater for its own output.
Aquarius said Phase 2 of the Zimplats project is expected to increase smelting capacity to cater for Mimosa and Unki mines production.
In the reporting period, Mimosa’s revenue fell 26 percent to $146 million due to lower metal prices and sales adjustments of $7 million.
It said earnings before interest, taxes, depreciation and amortization (ebitda) attributable to Aquarius were $27 million, and a loss before tax of $12 million.
The company said the result was achieved on production of 59,320 ounces attributable to Aquarius.
Mimosa’s second quarter to December production of 60,000oz was its highest ever quarterly production.
Its cash hold by end of the year was $14 million.Advertisement