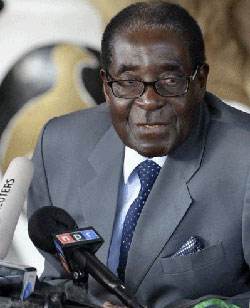 ZIMBABWE has given platinum mines a January 18 deadline to submit proposals to build a precious metal refinery after President Robert Mugabe last year threatened to ban raw exports, state media reported on Wednesday.
The ultimatum would affect the world’s two largest platinum producers, Anglo American Platinum and Impala Platinum Holdings (Implats), which both have operations in Zimbabwe.
The country has the second-largest known platinum reserves in the world and the government last year gave miners two years to set up a refinery in the country or face a ban on raw exports of the metal.
Busi Chindove, spokeswoman for Implats’ local unit Zimplats, confirmed to Reuters that her company had received a letter from the government to submit its plans for a platinum refinery, but would not give details.
Zimplats owns a base metal refinery that separates minerals like nickel, chrome and copper from platinum metal groups but sends platinum concentrate to neighbouring South Africa for processing.
The state-owned Herald newspaper said mines ministry permanent secretary Francis Gudyanga had written to Zimplats, Anglo American’s local unit Unki, and Mimosa mine, which is jointly owned by Zimplats and Aquarius Platinum Ltd, to submit refinery plans.
“Once the refinery is established all the producers in the country will be compelled to send the PGMs (platinum metal group) concentrate to this facility for toll refinery,” the paper quoted Gudyanga as saying in the letter.
Gudyanga was not immediately available for comment on Wednesday.
In December Finance Minister Patrick Chinamasa said the government would from January levy a tax on unprocessed platinum, part of efforts to force mines to set up a refinery in the country, but it did not give a figure.
The Zimbabwe chamber of mines has said the country would need to raise platinum output to 500,000 ounces a year to justify a refinery.
The chamber says Zimbabwe produced 350,000 ounces of refined platinum in 2012, about 6 percent of world output.
The chamber estimates that the refining facility would cost at least $2 billion, or about a fifth of the country’s gross domestic product, to build.Advertisement