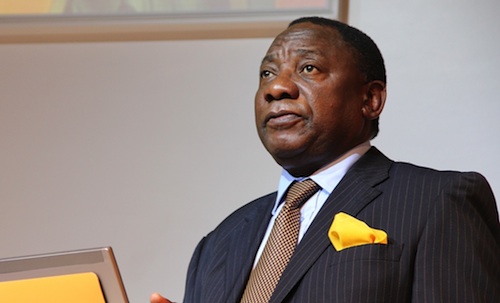 MINERS injured and arrested during a 2012 strike in which at least 44 people were killed, most of them by police, are suing South Africa’s deputy president, their lawyer said.
The 330 miners are suing Deputy President Cyril Ramaphosa for 1 billion rand (about $70 million), said their lawyer Andries Nkome.
Ramaphosa’s characterization of the wage strike as a criminal act rather than a labour dispute contributed to police shooting the miners, he said.
“We believe that he should be held responsible,” Nkome told The Associated Press.
The suing miners asked lawyers to review the findings of a government-appointed commission that exonerated Ramaphosa, who was a non-executive director and shareholder of the Lonmin platinum mine at the time, Nkome said.
A police operation during the strike led to the shooting of 112 miners, killing 34 on Aug. 16 2012. At least 10 more people died in the weeks before, including policemen and security guards.
During the labour unrest in Marikana, a town in South Africa’s North West province, Ramaphosa sent an email to executives describing the violence in the weeks before the shooting as “dastardly criminal acts” that required “concomitant action.”
In a statement, Ramaphosa said his email was taken out of context and that he urged officials to end the unrest that had resulted from the wage dispute.
The Deputy President instructed his lawyers to defend the action against him, Ramaphosa’s spokesman said in a statement this week.
Ramaphosa is also the deputy president of the ruling African National Congress.
He rose to prominence as a unionist and became a key figure during negotiations to end apartheid, according to the ruling party’s website.
Ramaphosa left politics to pursue private business, becoming one of South Africa’s wealthiest black businessmen, with wide ranging investments, including McDonalds South Africa, according to his company’s website.Advertisement