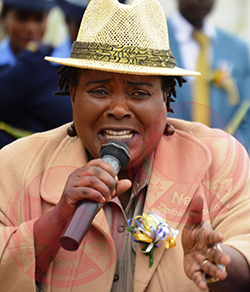 MUTARE: Manicaland provincial minister Mandi Chimene has warned Asian businesses refusing to install Point of Sales (POS) machines in their shops, saying “their days of operating in the province are numbered”.
Chimene said she was “very cross and very disappointed” with what she described as Indian “money barons”.
She was speaking on the side-lines of a workshop to discuss ZimAsset II and Sustainable Development Goals (SDGs) organised by the Ministry of Macro Economic and Investment.
“I am making this clear today that if the Indians don’t want to adopt the new cashless (payment) system by providing swiping machines they should close shop,” said Chimene.
The minister also hit out at the local the Asian community for snubbing the business forum which she said was meant to discuss developmental projects being initiated by the government to stimulate economic growth.
“They own quite a number of businesses, but their absence speaks volumes. They own three quarters of businesses in the city but surprisingly they don’t attend these development forums.
“I am very cross and very disappointed. I am going to engage them. They are letting us down.”
Chimene said the Asian businesses were also hoarding money at a time the country is struggling with serious cash shortages.
“Instead of coming to air their views and contribute meaningfully towards the development of the province, they are busy hoarding money.
“They are cash barons and they are afraid to mix and mingle with us. They think each time we call for meeting we want to expose their shady deals.”
She also blasted the Asian community for failing to renovate their buildings in the city.
“Most of their buildings are so dilapidated because they were constructed in the then Rhodesia. They don’t care because what they want is money.
“We cannot have a city run by people who do not want to maintain and develop it.”
She continued; “When you drive down the main street you see dilapidated buildings and their owners are Indians.
“They have all the money, but they don’t want to spend it in Zimbabwe. Where do they want to spend their money?
“You make the money here and you don’t want to spend it here. Your repatriate it back to your country of origin. They have to play to the gallery or ship out.”Advertisement